Only a few weeks ago, it seemed that the sun would be quiet and featureless when the Moon eclipsed it on Aug. 21st.

This weekend, however, the sun is welcoming the eclipse with a burst of renewed activity as a remarkably-long sunspot group AR2671 is sprawling across the solar disk, stretches 140,000 miles from end to end, almost twice as wide as the planet Jupiter. 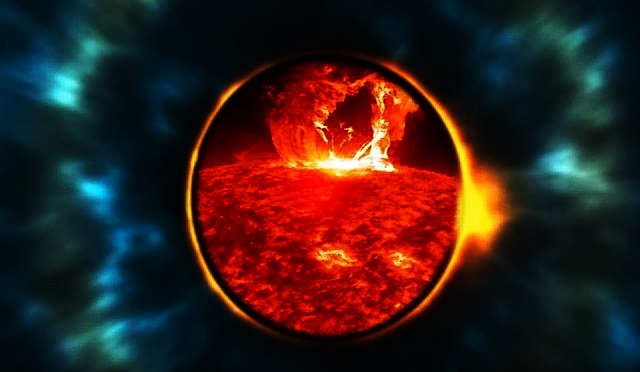 Solar Minimum was in full swing and suddenly there is renewed activity, is it just coincidence?

There are no coincidences!

The “Great American Eclipse”: The totality will reach Oregon at 10:16 AM Pacific, which is the 33rd state in the USA and will end in South Carolina at 2:49 PM Eastern which is on the 33rd parallel That means it will take 1 hour and 33 minutes to cross the country.

This eclipse happens on day 233 of the year. If the Revelation 12 sign is valid, then the day of the Total Solar Eclipse, to the date of September 23 is exactly 33 days. (Read the full story about the August 21 eclipse and its 33+ facts at Countdownreport.)

On September 23rd a unique astronomical alignment of the Sun, Moon, constellation Virgo, constellation Leo, and planets Jupiter, Mars, Mercury, and Venus is going to fulfill this passage from the book of Revelation:

“And a great sign appeared in heaven: a woman clothed with the sun, with the moon under her feet, and on her head a crown of twelve stars. She was pregnant and was crying out in birth pains and the agony of giving birth.”

The last time we had a full eclipse in 1918 – it was accompanied by pandemic and war. Flu crisis of 1918, millions died and the US was involved in World War 1.

Now as we face the next eclipse, besides that it is said that such a celestial event can lead to strange behavior whereby people suddenly abandon their peaceful ways and devoted themselves with uncharacteristic fervor to making war on their neighbors and fighting among themselves, we have an Opioid crisis and an upcoming World War 3?

Coming back to AR2671, this unexpected sunspot has a ‘beta-gamma’ magnetic field that harbors energy for M-class solar flares. It is quite possible that the sunspot will explode during the eclipse, so if you are in the total eclipse path set your clock to greet this awesome spectacle on Monday.

At all it seems that we are about to witness an extremely unusual convergence of events the coming month that many believe could represent a major turning point, especially for America.

There are no coincidences, it is all connected!