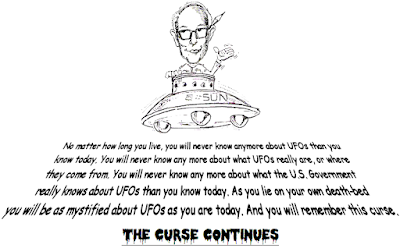 It is an interesting observation and reflects my opinion about many of the “unsolved” ufo cases in the various databases. In my continuing articles about the “The UFO evidence under review” and “The 701 club”, I have noticed that many of these “unknowns” can be explained or do have potential solutions. This does not mean that all of these cases can be explained. However, with so many potential or good explanations, what does it say for the remaining “unknowns”? With a database populated with so many mistaken observations, can we really consider the remaining cases proof that UFOs are, as NICAP put it, “manifestations of extraterrestrial life”.

UFOlogy seems to be on the ropes these days. When new “smoking gun” cases are presented, they often are explained by an individual or some group of individuals. Even the older prize cases are being openly questioned. As each of these important cases are
exposed to be not as solid as claimed, the more UFO proponents cite the older classic cases as proof that UFOs are exotic phenomena unknown to science.

A good example of the problems associated with how UFOlogists interpret reports appears on page 6. While some UFOlogists rely solely upon the witness reports, a bit of minor detective work revealed the true source of this “mass sighting”. There is little doubt as to the actual source because of the data gathered by another organization that also specializes in gathering reports. However, their reports were more informative and their observers “knew what they saw”.

As I have mentioned in the past issue, the upcoming solar eclipse will dominate a significant amount of my free time for the next few months. This issue, I have an article about “potential UFOs” being reported during the eclipse. I don’t expect many UFO reports but, then again, I did not expect people to mistake Venus for a UFO in the 1991 eclipse. One never knows for sure. I want to encourage readers near the centerline to travel to the eclipse path and view totality. You will not be disappointed.

In Search Of ‘Progress’ in UFOlogy – At the End of the Road?