Charlotte Saunders Ferguson posted on her Facebook page a video in where you can see that Hurricane Irma took all the ocean waters in Long Island in the Bahama’s. Charlotte shocked by what see witnessed wrote “bible prophecies being played out right here and now it’s like God opened the red sea for Mozes, God is amazingly powerful.” 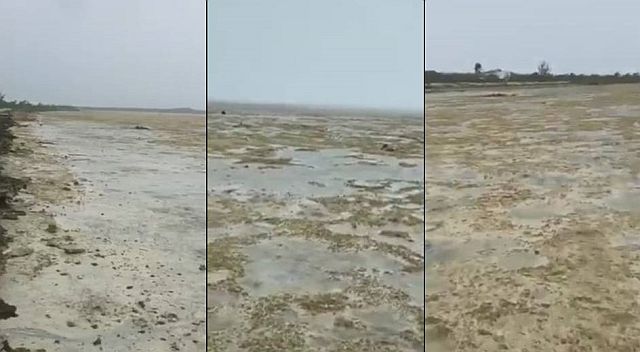 If you see the video below than it’s quite understandable that she was shocked by what see witnessed. Now there is much discussion on the web about how it is possible that all the ocean waters suddenly disappeared.

Well, there is nothing “Natural” about the sudden disappearing from the ocean waters. It has everything to do with Water Vapor Generation in advance of the storm that will be sucked up and dropped on Florida in torrential rain.

Circular In-Place Simultaneous and Coordinated Bursts of Rapid Evaporation combining to create the bands of Irma, and that exact process can be seen throughout this storm’s development.

From start to finish, the bursts are the only reason this storm exists at all, and they prove the manmade and deliberate origin. The fact of the matter is this Global Water Vapor Generation System that created Irma from scratch all the way across the Atlantic in Africa, has existed and been under development for over half a century.

The very same bursts visible throughout this storm are identifiable on satellite imagery from the 60s and 70s. Granted, there were considerably less of them and this system was far less widespread, but this method of weather has been hidden from the public in plain sight for at least 50 years

Below Charlotte’s ocean video followed up with an excellent video showing how such a Global Water Vapor Generation system works.

Update: The ocean bed has filled up again, the sea has gradually come back.