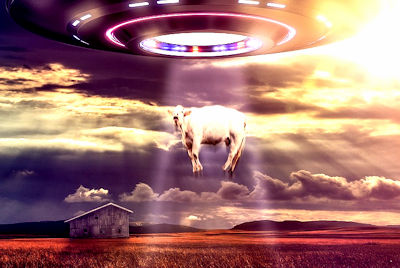 Cattle Mutilations: “Aliens Were Involved, Without a Doubt”

The bovine, a black Aberdeen Angus cow, showing the tell-tale signs of mutilation, was found over the weekend in a ranch some 15 kilometers south of the town by the property’s owner.

According to Zurbrigk, the animal was missing its anus, tongue, eyes and jaws, displaying perfectly cauterized incisions. It was a cow about to give birth and in perfect health. The fetus remained inside it.

According to the livestock farmer: “Aliens were involved, without a doubt. This has been going for over 20 years and no one has offered any solutions. They must remove the organs aboard the spacecraft, because there was nothing strange to be found around the animal. One can also see that they must throw the animals from their craft, because they land with their legs backward.”

He added that other animals avoid coming within 50 meters of the mutilated cow. “These cases are classic. I don’t know how dogs are aware of them and come no closer.”

He expressed surprise that no serious investigation had been conducted in this regard. “It’s better that no investigation is performed than to do what they did years ago: put the blame on the red-muzzled mouse. Mice don’t eat meat, for starters, and they don’t exist. We have no doubt here that extraterrestrial beings are involved.”

* [Translation (c) 2017 S. Corrales, IHU with thanks to Guillermo Giménez]