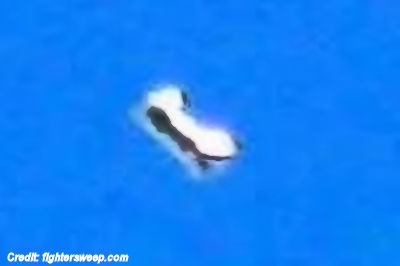 wingman and WSO launched just after them in FASTEAGLE 02. They climbed overhead the ship and rendezvoused in normal fashion before setting off to their assigned work area in the open ocean south of USS Nimitz. Normal day, normal ops for the pre-deployment work up cycle they were in the middle of.

What Dave didn’t know was for the past several days, Princeton had been picking up some bizarre returns on their Death Star-worthy SPY-1 radar. On several occasions beginning 10 November, the Fire Control Officer and the extremely experienced Fire Control Senior Chief had detected multiple returns descending from far above the radar’s scan volume–somewhere higher than 80,000 ft. The targets, dubbed Anomalous Aerial Vehicles (AAVs), would drop from above 80K to hover roughly 50 feet off the water in a matter of seconds.

Always over the same spot, a Lat/Long about 30NM off the coast of Baja, roughly 70nm southwest of Tijuana. At the time, the SPY-1 was the most sophisticated and powerful tactical radar on the planet. With it, they were able to track these AAVs while they descended, hovered and then zipped away at speeds, turn rates and accelerations faster than any known friendly or threat aircraft. Impossibly fast.