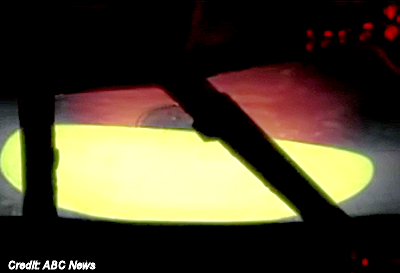 The winters were so grim he applied for a transfer to Vietnam during the height of the war. Uncle Sam sent him to Germany instead.

Anyhow, during his sayonara to the newsroom, Mic mentioned something about how he’d been on duty when he got sucked into a UFO incident, an experience that impressed him so deeply he saw fit to bring it up during impromptu remarks to colleagues nearly half a century later. But it was a small fleeting recollection and he didn’t linger there.

Mic still freelances, and a few months later I pulled him aside one afternoon and asked for more details. I couldn’t help but smile as he rattled off words like Minot Air Force Base, 1968, B-52, radar, radio interference, security breach, etc., etc. Mic isn’t a UFO geek, he doesn’t follow this stuff, so he was unaware of just how significant this incident was, in terms of evidence. At the end of his recollection, Mic repeated another phrase that actually made me laugh out loud because I’d heard it so many times before. He said he’d been debriefed by an Air Force colonel, his testimony had been tape-recorded, and that the officer left him on this note: “This didn’t happen.”

written by a USAF veteran who’d been stationed at the same outpost, Minot, just two years earlier, 1966. Same general idea, though – unauthorized UFO activity over a Strategic Air Command base armed with nuclear missiles. No trifling matter. I suggested Mic take a peek at the www.minotb52ufo.com website, an impressively detailed reconstruction of that sliver of history he’d been a party to in the wee hours of Oct. 24, 1968. Researcher Tom Tulien had constructed an underappreciated narrative packed with veteran eyewitness testimony, the Strategic Air Command’s own documents, and assessments from technical analysts. I thought maybe he could test his memory against the record.

Mic dropped in a few weeks later. He’d been to the site, and he was jazzed. The details – everything he remembered about what happened lined up. Everything. He was in air operations that night, he’d heard it all.

Mic’s job was to know the flight plans of everything in the immediate sky to make sure nobody bumped into each other; sometimes, civilian neighbors near the base made inquiries about other things they’d seen. “We did get some UFO reports, probably a lotta farmers who were drunk,” he conceded. “But this was completely different. It lasted such a long time, and I guess that’s what made it stick with me.”

Shortly after 2 a.m., maintenance and security teams outside the remotely spaced launch control facilities – each of which housed Minuteman nukes – began noticing at least one, maybe more, large bright glowing object in the sky. It or they changed colors, white to amber to green. It or they went high, dipped behind treelines, reversed course on a dime. Air traffic control alerted a B-52 returning from a training mission to a bright glowing bogey off its 1 o’clock position as it executed a 180-degree turn for its final approach. The UFO wheeled with it and maintained its distance, at a rigid three miles. But as the bomber completed the turn, within a three-second sweep of the radar, the object pounced to within a mile. For the next 10 seconds, the plane’s two radios fuzzed out, even as an onboard camera took sequential photos of the radarscope recording the UFO when it changed positions.

Moments later, ATC diverted the plane to get a visual on a UFO reported on or near the ground. One pilot spotted it immediately, some 10 miles away and below, comparing it to “a miniature sun.” As they banked above it, another crew member described it as metallic, smooth, egg-shaped, a “dull reddish color like molten steel.” Once again, the ground briefly lost radio contact with the B-52, which landed at 4:40 a.m. But additional sightings trickled in for nearly an hour afterwards.

“I was on the phone with the guy who called it in from the missile site,” Mic recalled. He was monitoring comm chatter when the radios blinked out, and he remembers how the object looked on radar. “The return was more intense than a C-135 during refueling.” He saw the B-52 team when they returned – “they were visibly shaken” – and got a look at their subsequent illustrations of the object(s). After Mic’s shift ended, he was interrogated about what he’d heard and seen, this Thing That Never Happened. Obliged to say something, anything, official investigators concluded that Minot AFB personnel — these defenders of the world’s most destructive weapons — had simply been confused by Vega, Sirius, ball-lighting plasmas, a combination of all three, whatever.

Incidentally, It Never Happened involved an even spookier case. In 1966, writes (Ret.) Capt. David Schindele, launch operators lost control of as many as 10 nuclear-packed missiles when their power blinked off during apparent UFO surveillance. Which means Mic Huber has a lot of company. UFOS and Nukes author Robert Hastings has gotten more than 150 veterans to go on record about a phenomenon’s apparent fascination with our nuclear armaments. No telling how many more eyewitnesses who were told to shut up are out there.

But even if each and every one of these guys stepped up tomorrow to share what they knew, it wouldn’t make any difference. Events over the last year have only reinforced how deeply into denial and aggressive ignorance our culture has descended. In spite of that, amid turdstorms of truly fake news, some of the most diligent investigative political journalism I’ve ever read is unfolding right now, daily. Downright heroic, in some cases. And yet, American journalism is no match for The Great Taboo. Because most of the people who dare to own it tend to lack, umm, conventional pedigrees.

Wednesday, for instance, classic example: Former Blink-182 frontman Tom DeLonge sparked what will be, if traditional patterns hold, a quick-hit flurry of sensational headlines. The details are posted at To The Stars Academy of Arts & Science and — once again — are straight out of left field. DeLonge is the California punk-pop rocker whose self-parodying music videos — dancing around in brief undies, licking coin-operated viewfinders, bored on the commode, babes weeping with desire — were so convincing during the Blink days you just wanted to punch the smirk off his face.

And yet, as early as 2015, DeLonge was telling “Us” magazine he was in contact with heavy-hitting government types he hoped to coax out of the shadows to address the UFO conundrum head-on. It was easy enough to blow him off until, late in the 2016 campaign, WikiLeaks (or somebody) hacked the emails of Hillary Clinton’s campaign director John Podesta, which showed DeLonge was indeed in the loop with a couple of two-star USAF generals and an advanced projects director for Lockheed Martin. And even then, who knew, maybe they were just big fans of “Enema of the State” and “Take Off Your Pants and Jacket.”

Then came Wednesday. Lo and behold, there was DeLonge, introducing business partners in a half-hour video presentation designed to drum up crowd-sourcing to support something called To The Stars Academy. Its stated purpose was, with the UFO mystery at its core, to provide “gifted researchers the freedom to explore exotic science and technologies with the infrastructure and resources to rapidly transition them to products that can change the world.” And whoa, get a load of their cred:

Deputy Assistant Secretary of Defense for Intelligence; Senior Intelligence Service, CIA Directorate of Operations; Lockheed Martin “Skunk Works” Advanced Systems Director; director of scientific research programs for the Defense Department, the CIA and the DIA; a counterintelligence agent who ran an “aerospace threat identification program” out of the Pentagon. The jewel of this narrative was relayed by Chris Mellon, the former SecDef assistant. He discussed an hours-long incident in 2004 involving the aircraft carrier USS Nimitz, F-18 jet fighters, a UFO that seemed “to defy the laws of physics,” and footage of the whole thing. Captured by gun cameras. Plus infrared images. Property of the U.S. government.

But this stuff can only be huge if the press is interested enough to dig, to background these guys, to pursue every lead and put it out there. What we’ll probably get instead is a convulsion of wry headlines, some “the truth is out there/out of this world” segues, maybe even some cursory reporting, but it’ll all wander off soon enough. Whatever followups occur will be tepid and of little consequence, or at least without the persistence essential to stoking public interest. And without public interest, this ship doesn’t sail. Or at least not very far.

And that’s one of the reasons De Void has been dormant for so long. Ultimately, this space started sounding futile and whiney. The only reason for this posting is to send one more shoutout to all the Mic Hubers, to all you folks who saw and may still be seeing crazy airborne stuff snooping around the most dangerous weapons in the history of warfare. This is news. Just because the media doesn’t think so, that doesn’t mean you’re crazy.

Unfortunately, yes, you do live in a superpower nation that has degenerated into an absolutely certifiable full-tilt nuthouse. But it’s not your fault.

On Breaking 40 Years of [UFO] Silence

UFO Tracked on Radar at Minot AFB: It Was Near Nuclear Missile Sites At The Time