A commercial airline passenger on a flight from Toronto to Edmonton spotted a strange bright object appearing to be at the same altitude. He took pictures with a Galaxy S8+ cell phone before the object flew off to the east. 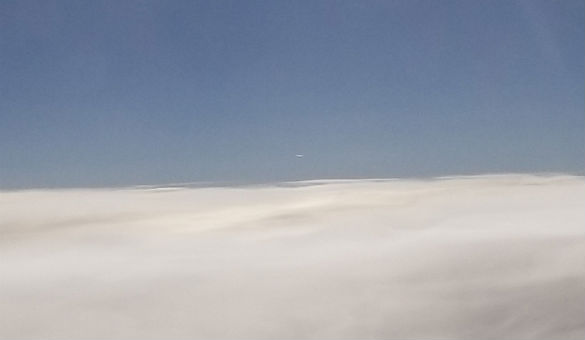 The witness submitted the UFO report to the Mutual UFO Network (MUFON) on October 24, 2017, and says the sighting took place on October 19 at around 4pm. The witness says the path of the flight took the aircraft over the U.S. border and he estimates they were over Minnesota when he spotted the object. 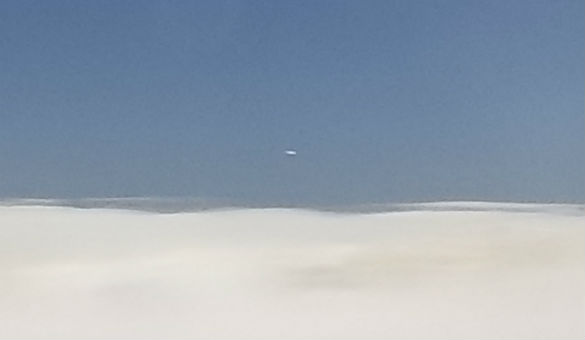 I was flying West from Toronto to Edmonton on Oct 19, 2017. We took off from Toronto around 3pm and had been flying for about an hour when I looked out the window and saw this object shining in the distance.

I took a bunch of pictures with my S8+ a few I zoomed in also. The object then disappeared to the east and that was it. No trails behind it, just gone.

I checked our flight path and it took us down to the US Canada border so this object would have been over US airspace at 40,000 ft or so. Location Minnesota is an educated estimate of location.

The photos do show a white elongated object in the distance. It is a bit whiter and brighter than the clouds and could be a small cloud or a small bit of contrail from another aircraft. The witness stated that the object was “shining,” indicating it might be a metallic object, and if the object did fly off, that would negate the cloud theory. 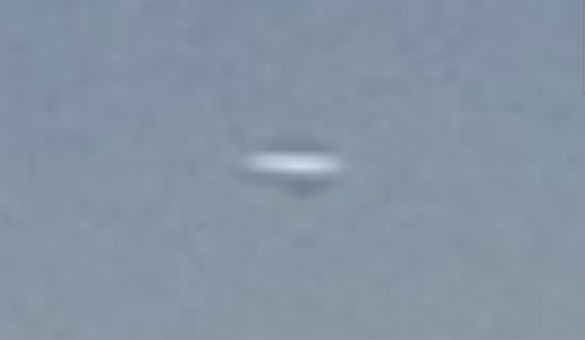 There are five pictures that can be downloaded here: picture 1, picture 2, picture 3, picture 4, picture 5.

The vast majority of UFO sightings turn out to be mundane objects, but once in awhile there are sightings that are much more difficult to explain. MUFON conducts investigations on sightings submitted to their website, and if they share their conclusions, we will let you all know. Meanwhile, others will likely chime in and we will try to keep you up to date with any discoveries. Please feel free to share your thoughts on this sighting in the comments below.