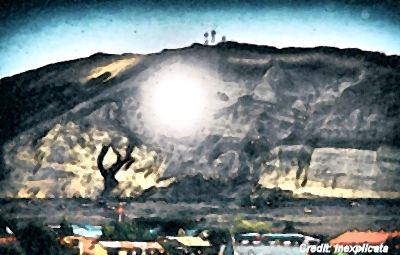 • Phenomenon has been occurring since September

Patricio Frias, a representative for UFO Noise Patagonia (a body devoted to researching anomalous phenomena), stated that a light had been reported on 9 September 2017 in Sierra Dorotea, suspended halfway up the mountain and emitting bright flashes in broad daylight. The foregoing was witnessed for about 10 minutes by witnesses in the Camino Tres sector of Huertos Familiares.

On 28 September, an inter-provincial bus driver witnesses and alleged craft in the Camino 4 sector of Huertos Familiares, northwest of the city of Puerto Natales. The vehicle allegedly made a close flyby of the bus before speeding off toward the north. In this case, the witness managed to take three photographs showing the object’s maneuvers.

Finally on Wednesday, 18 October at around 23:00 hours, witnesses in Camino 4 of Huertos Familiares saw a light toward the Teniente Julio Gallardo airport. The particulars of these events are being analyzed in Santiago by the AION group led by renowned researcher Rodrigo Fuenzalida.

Patricio Frias noted that “there is an increase in phenomena of this sort around this time of the year, and we call upon the community to be on the lookout and forward any information to our attention at [email protected], whether it involves reports, photographs or video evidence.”

Persons interested in these matters can explore it more fully at the ufologist’s “Realidades del cosmos” Facebook page. Moreover, stories from those who have experienced phenomena of this sort can be heard on the program broadcasted on Wednesdays from 22:00 hours on Viento Sur radio.

[Translation © 2017 S. Corrales, IHU, with thanks to Guillermo Giménez]

Chile UFO: “Humans Could Not Have Manufactured It,”