A loud boom and a flash of light can be heard and seen in the surveillance footage below taken by Philip Vicari from his home on Popular Street in the Bradley Gardens section of Bridgewater, New York on Wednesday, November 1 around 8:30 p.m. 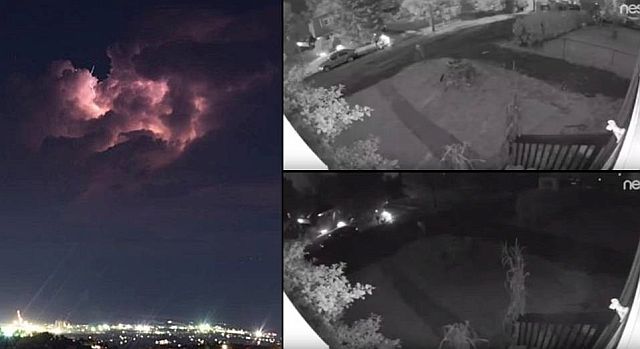 On Thursday, November 2, a strange phenomenon shook the Tijuana-San Diego border that many residents believed was an earthquake. They heard a rumble before the shock around 11.00 in the morning. Doors and windows rattled due to the powerful shock.

But neither the United States Geological Survey (USGS) nor any other seismological entity detected any earthquake in the area.

Luis Mendoza Garcilazo, a seismologist at the Center for Scientific Research and Higher Education of Ensenada (CICESE) ruled out that it was an earthquake or a telluric movement. (Telluric movement is an electric current which moves underground or through the sea.)

The geologist Pat Abbott indicated that if something had happened below the surface it would be registered by the multiple instruments that exist but because that was not the case Pat Abbott is convinced, what shook the residents of the border originated from above, reports univision.com.

Mendoza pointed out that according to the records in the CICESE measurement instruments it was a “shock wave” like the one that occurs violently when an object travels faster than the speed of sound.

Such a “shock wave” can be caused by various situations, such as an explosion, the passage of a supersonic airplane, the entrance to the atmosphere of a meteorite or an Unidentified Flying Object – UFO.

While it remains a mystery what might have caused the booms and shock waves near the Tijuana-San Diego border and New York it seems that something is moving at a tremendous speed over the US.