The ESA and NASA mission SOHO got a visit from an old friend this week when the highly unusual comet 96P entered its field of view on Oct. 25, 2017. 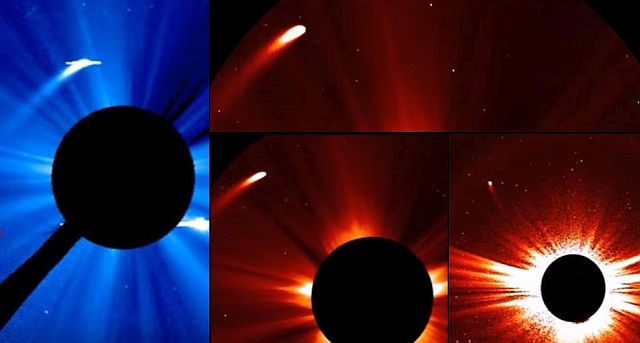 The comet entered the lower right corner of SOHO’s view, and skirted up and around the right edge before leaving on Oct. 30. SOHO also spotted comet 96P in 1996, 2002, 2007 and 2012, making it the spacecraft’s most frequent cometary visitor.

At the same time, comet 96P passed through a second NASA mission’s view: STEREO that also watched the comet between October 26 and 28 from the opposite side of Earth’s orbit.

It is extremely rare for comets to be seen simultaneously from two different locations in space, and these are the most comprehensive parallel observations of comet 96P yet.

Comet 96P — also known as comet Machholz, for amateur astronomer Dan Machholz’s 1986 discovery of the comet – completes an orbit around the Sun every 5.24 years. It makes its closest approach to the Sun at a toasty 11 million miles – a very close distance for a comet.

When comet 96P appeared in SOHO’s view in 2012, amateur astronomers studying the SOHO data discovered two tiny comet fragments some distance ahead of the main body, signaling the comet was actively changing. This time around they have detected a third fragment — another breadcrumb in the trail that indicates this ‘Unusual Comet’ is still evolving.