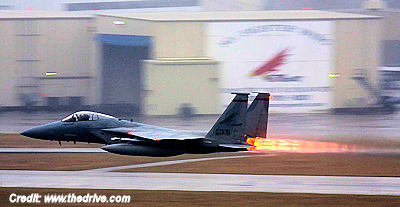 like Portland and Seattle and beyond. The incident began, at least as best we can tell, around 4:30pm near the California-Oregon border and resulted in multiple pilot eyewitnesses, recorded air traffic control audio, and eventual confirmations from both the FAA and North American Aerospace Command (NORAD) that it did indeed occur.

NORAD’s reply was quick and clear. An incident involving multiple airline crews, air traffic control, and F-15Cs from the 142nd Fighter Wing based out of Portland did occur. According to the limited information NORAD supplied, airliner pilots were asked by FAA air traffic controllers to help track and possibly identify a “white aircraft” traveling in the flightlevels nearby—roughly between 35,000 and 40,000 feet based on the radio recordings. NORAD also said that the incident did result in F-15s from Portland being scrambled to investigate, but by the time they got up and “looked around” the mystery aircraft couldn’t be found.