About a year ago, on December 12, 2017, the witness took an image of an unusual disk shaped cloud formation, but even stranger is the greenish diamond shaped anomaly which can been seen below the cloud formation. 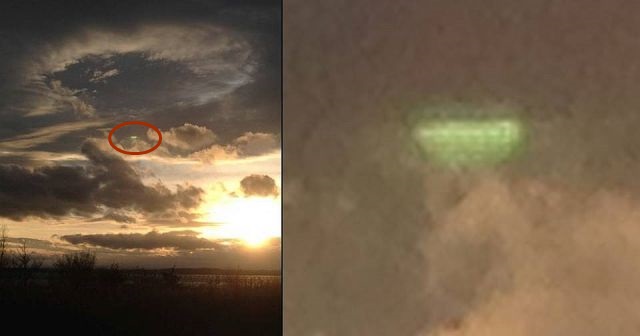 While it is not inconceivable that the greenish object is just lens flare, the object has all the characteristics of a fixed structure, described by the photographer as a line of green orbs.

Witness: “On my days off work I walk the dog at the back of Speke Hall right next to Liverpool John Lennon Airport and sometimes I take photographs of the sky and the sun setting down but this picture I took was because of the clouds.”

“After a couple of weeks of taking it I noticed a line of green light under the clouds and when I zoomed in on the photograph I spotted green orbs that appear to be next to each other which seem to be attached to something.” Mufon case 88323.