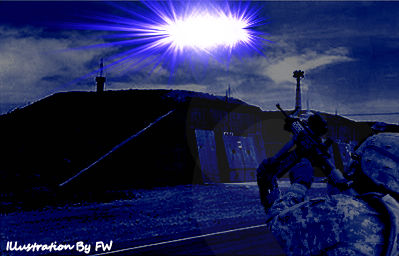 In the early 1970s, Michael D. Jenkins was a member of the 96th Security Police Squadron (SPS), located at Dyess AFB, Texas. At that time, the base was home to the 96th Bombardment Wing, composed of nuclear-armed B-52 bombers. The nukes were stockpiled at the Weapons Storage Area (WSA), operated by the 96th Munitions Maintenance Squadron (MMS).

In 1973, I was a Sergeant (E-4) and worked at the Secondary Central Security Control facility in the munitions maintenance area. I think this happened in October. I was standing on the 3rd Floor balcony of the SPS barracks, talking to a buddy, when I noticed a vehicle with yellowish flashing lights speeding down the access road from the Headquarters area. One light meant it was the Assistant Base Commander for Operations; two lights meant it was the Base Commander. The vehicle had two lights flashing.

Moments later I saw a Security Alert Team vehicle, designated SAT-2, racing toward our location. Suddenly, a klaxon went off in the building, notifying us of a recall to the Central Security Control (CSC) facility. We went to our rooms and quickly got dressed. The Chief Master Sergeant came over the intercom speaker, telling us to ready ourselves and to board the ton-and-a-half truck waiting outside the barracks.

While enroute to the CSC, which was located near the flight line, we noticed that the MMS area seemed brighter than usual. The igloo bunkers that house the weapons are surrounded by ballpark-type lights, which are really bright, but the glow we saw was much brighter. I just assumed that it was caused by the moon rising over the horizon.

Upon arrival, we were ordered to draw weapons from the armory and to get in line for our order assignments. I was given SAT-3 which always patrolled the western perimeter of the base, near the C-130 Transport practice runway. While we were on patrol, we kept our radio open loud to catch orders from CSC and heard that they had sent 12 cops armed with M-16s out to the MMS area.

We also heard the three dog (K-9) teams that normally patrolled the MMS perimeter reporting that the dogs were afraid and acting up. CSC was worried they would turn on their handlers and ordered them to be withdrawn from the area.

Also, we heard that a C-130 was on approach to the base and had been ordered by CSC to do a fly-by of the MMS area to get a look at it from the air. The CSC microphone was open and we could hear this in the background chatter.

We listened to all of this—the cops with M-16s being dispatched, the problem with the dogs, the C-130 being diverted—via the radio in the truck, as 2nd CSC and Main CSC talked back and forth.

The next thing we heard was an order to fire on some kind of object that was hovering over the [weapons igloos]. The order to ‘move it out of the area’ came from Strategic Air Command Headquarters at Offutt AFB. Seconds later, as we sat in our vehicle with the windows down, we could hear gunfire across the base. At that moment, we saw a streak of bluish-white light moving at high speed towards the southwest. It was the UFO getting out of there! It passed right over the end of the runway.

After about three hours of continuous patrolling we were ordered to come in via CSC. When we arrived there, we were ordered to stand-by in the inspection room for further orders. While we waited, we talked with the guys who had shot at the UFO, asking them about what they saw. They seemed scared. One of the other sergeants said that he had never believed in flying saucers but now he did. Another person described it to me as a large ball of light that hovered about 150 to 200 feet above the igloos.

After 20 minutes waiting, we were called to attention by an officer and told that if anyone were to ask about this incident we were to refer them to the Base Information Officer. We were to tell no one about what happened this night, under penalty of court-martial.

One of the sergeants in the CSC room spoke up and told the officers present that the UFO had leaked something as it moved out across the base. We later found out it was like the ‘angel hair’ that you put on Christmas trees. It created a trail from the MMS area all the way across the base to the southwest perimeter, past the southern runway in the C-130 practice area.

The next day, I was assigned to the Primary CSC area with four hours sleep. A teletype message was given to me to take to our commanding officer; the envelope was marked CLASSIFIED but not sealed. I was cleared for Top Secret messages, so I snuck a peek as I walked it to the major’s office. I don’t remember his name. Basically the message said that the Texas Department of Public Safety had taken samples of the angel hair to their lab and that the State of Texas would advise the Air Force regarding their findings.

The angel hair hung around on the area ropes and buildings for three days. On the third day it rained and the material dissolved, completely disappearing. The day after that, I again served my shift at CSC and another teletype came in, only this one was TOP SECRET. Again the envelope was not sealed. The message read something like, ‘After full chemical analysis it is the opinion of this lab that the substance is not of this world’ or words to that effect.

I was discharged from the Air Force in 1974. I said nothing about this incident until 1977, when I contacted the Center for UFO Studies. They never did anything with my tip. In 2015, I sent this information to MUFON. Again, nothing was done with it as far as I know. That’s why I’m writing to you.

I asked Jenkins to send me his DD214 military service record, to confirm his former status as an Air Force Security Policeman assigned to the 96th SPS; he readily complied. He also provided me with the names of a few other persons who were involved in the incident and I will attempt to locate them.

This report is only one of many involving UFOs maneuvering above USAF nuclear Weapons Storage Areas. Documented incidents occurred at Manzano Base, New Mexico and Killeen Base, Texas in 1949; at Loring AFB, Maine and Wurtsmith AFB, Michigan in 1975; and at Kirtland AFB, New Mexico and the RAF Bentwaters base, in the UK, in 1980.

The so-called “angel hair” mentioned by Jenkins is a well-known if infrequently reported feature in some UFO sighting cases. One example may be found here.