Saarbrucken (Germany) – While the media interest in the unveiling of a secret UFO research program by the US Department of Defense through the “New York Times” is still unbroken, independent researchers are investigating the information and videos presented. Especially for the alleged UFO-encounter of the USS Nimitz Aircraft Carrier Combat Group in November 2004, which was actually well confirmed by at least two military eyewitnesses, the trace of the accompanying video leads to a German film production company, whose specialties are also 2- and 3D animation and special effects. The leading German newsblog on frontier science and the paranormal Grenzwissenschaft-Aktuell.de (GreWi) investigated. The result is all the more mysterious…

As GreWi already reported last October, the circumstances of the incident have been known at least since 2015 through an article on the US-American aviation and military website “FighterSweep.com”.

Furthermore a video of the on-board camera and tracing system (ATFLIR) of one of the fighter interceptors involved in the USS-Nimitz UFO-encounter is supposed to show the object and have been available online since 2007.

In fact, since 2007 the so-called “WaybackMachine” of the internet archive “Web.Archive.org” shows a download-option for the video under the name “f4.mpg” via the website or server of the German film production company “Vision Unlimited” (VU) based at the town of Uhingen. VU’s specialties include 2- and 3D animations as well as special effects.

Understandably, this fact still raises doubts among many observers, investigators and skeptics about the authenticity and origin of the video, which is described by the “New York Times” and the “To The Stars Academy” as “officially released by the US government”.

GreWi-Editor Andreas Muller asked the manager of “Vision Unlimited”, Mr. Philip Schneider about the above described situation and he explains:
“Unfortunately, I can’t help at all. We don’t know where the file came from and can only say that it hasn’t been on the server for a long time since. Because the case is so strange, we also wanted to investigate. But quickly this showed to be fruitless because the file was on an old server and all data (LOGs etc.) are no longer available. I’ve also talked to former employees who had access to the server, but no one could tell me anything about it.” On a further inquiry to clarify that the video in question is NOT a product of “Vision Unlimited”, Schneider summarizes the situation again from VU’s point of view: “Yes correct – we have nothing to do with the video!

The search for the origin of the video through “Vision Unlimited” not only leads to a dead end, but also raises more questions than answers: Where does the video came from and how, why and by whom was it placed to the server of the VU-website?

Ultimately, only the publication of the videos raw data through an official channel of the US-Government could answer questions of origin and authenticity of the video as allegedly being of the on-board camera and tracing system on board the Nimitz-Super-Hornet. These data could then also answer critical questions about what the object actually is – or at least what it is not. 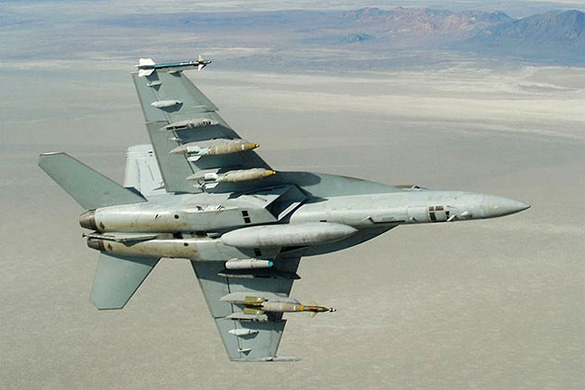 Raytheon’s “Advanced Targeting Forward Look Infrared” (ATFLIR) sensor, like the one used to track a possible UFO in a 2004 incident, is carried under the wing of this fighter jet.
Copyright/Source: Raytheon.com

While even Raytheon, the company producing the ATFLIR-system, is currently advertising that it could be their own system that “caught the first evidence of E.T. out there”, at the same time they also point out that “even so, the video images are not definitive proof that the jet pilots were chasing an actual UFO. To really be sure, we would need the raw data.” 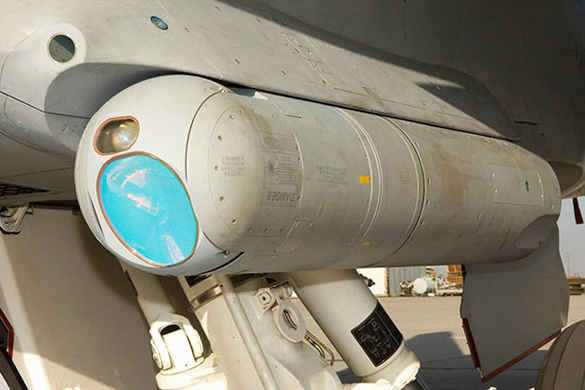 What is interesting about Raytheon’s statement, however, is that they seem to have no doubt from their side that the recordings are taken from one of their military-used ATFLIR-systems.

This article was reprinted with permission from www.grenzwissenschaft-aktuell.de.