The news cycle on this latest revelation that the Department of Defense (DoD) had a project called the Advanced Aerospace Threat Identification Program (AATIP) that looked into UFOs – remember the U is for “unidentified” not aliens – seems to be coming to a close. Dozens of interviews were conducted, many, if not all, can be seen at this link, and many more stories written. But it seems with all that was learned, many more questions remain to be answered.

On December 16, 2017, The New York Times posted an article that may have forever changed how the general public views the UFO topic. Luis Elizondo, who had previously claimed to work for a UFO project for the DoD, and The New York Times, shared much more detail about the project. The news made worldwide headlines and set off a weeks long media frenzy with interviews with Elizondo, jet fighter pilots who chased UFOs, and retired Nevada Senator Harry Reid, who took the lead on securing funding for the program. 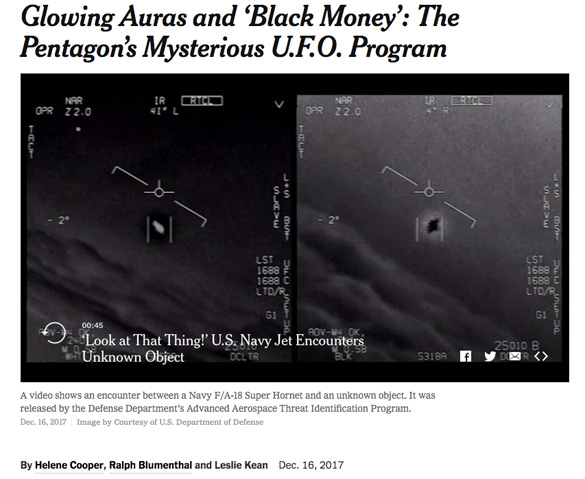 The article that started it all.

However, now that we are almost a month out, the media cycle seems to be coming to an end and the story seems to be fading. But it most likely will not stay that way, because for as many questions that were answered, many more have come to light.

For example, Elizondo said he was able to get permission to release three videos of objects they were unable to identify. So far, only two of those have been released, and even these two warrant further scrutiny. One of the better-known videos was from a case that a few UFO researchers had already been examining. This was a sighting of what has been referred to as a Tic Tac shaped UFO by crewmen in the Nimitz aircraft carrier group. The sighting was in November of 2004 near of San Diego.

Robert Powell, a UFO researcher with the Scientific Coalition for Ufology (SCU), has been working with the Navy on a Freedom of Information (FOIA) request he had made on the case. He outlined his research thus far in a previous article on OpenMinds.tv. Investigative documentarian Jeremy Corbell had also been researching this case.

Most had heard of the case from a blog post made by one of the pilots who witnessed the event. An alleged video from the event was also leaked. Now it has been confirmed the video is from the Nimitz UFO encounter, but we do not know how that video got out to the public in the first place. This was the focus of another recent OpenMinds.tv article by contributor Andreas Muller from Germany. It is video from an advanced infrared camera on an F-18. Not the kind of thing that normally makes its way to YouTube.

Although some detail about this event has made it out to the public, the reports and files on the investigation of this UFO are still under lock and key. Powell has not received any of this, despite his requests. He is hopeful now that it has been revealed AATIP looked into this case more documentation will be released.

The second video, referred to as the GIMBAL video, was released with very little information as to its origins or the situation in which it was acquired. According to the To the Stars Academy (TTSA) website, an organization Elizondo now works for, the video “was captured by a US Navy F/A-18 Super Hornet using the Raytheon AN/ASQ-228 Advanced Targeting Forward-Looking Infrared (ATFLIR) pod.” However, the date, time and location are still kept under wraps. No doubt there is a stack of FOIA requests on this one.

So why release these videos without supporting documentation, and when will we see the third? We don’t know.

The Washington Post wrote: “Elizondo, in an internal Pentagon memo requesting that the videos be cleared for public viewing, argued that the images could help educate pilots and improve aviation safety. But in interviews, he said his ultimate intention was to shed light on a little-known program Elizondo himself ran for seven years…” 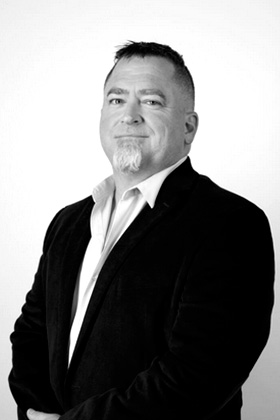 This seems to imply Elizondo was able to get the videos released under false pretense. However, I have been told that this statement by The Washington Post is inaccurate, and this is not how the videos got released. Well then, how did he get permission to release them, and what was the rationale behind it? We do not know.

There are a host of other questions. What other cases did AATIP look into? Do they have more video? Are these three the best they have? How many cases did they investigate and how many remain unknown? Even more exciting, how many of these objects do they believe exhibit technology much more advanced than what we Americans, or humans for that matter, have?

Then there is the case of the mysterious metals. The New York Times wrote: “Under Mr. Bigelow’s direction, the company modified buildings in Las Vegas for the storage of metal alloys and other materials that Mr. Elizondo and program contractors said had been recovered from unidentified aerial phenomena.”

WTF? Were these metals analyzed? If so, by whom and what did they find? If the phenomena that produced these metals are still unexplained, does that imply any analysis done thus far was inconclusive? What sort of properties do these metals have? Are they extraordinary? This is kind of a big deal, but we have no answers, and the media is not even asking these questions…yet.

Does this tweet by Tom DeLonge, President and CEO of TTSA, posted two days before The New York Times article, have anything to do with these metals? 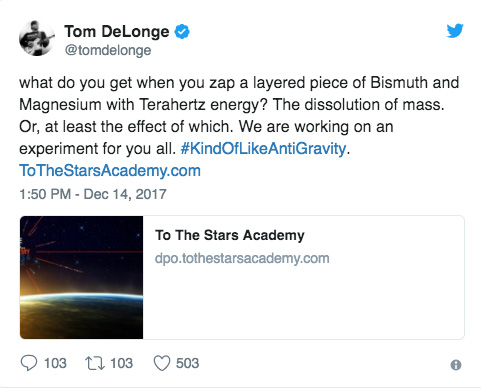 After mentioning the metals, The New York Times continued, “Researchers also studied people who said they had experienced physical effects from encounters with the objects and examined them for any physiological changes.”

Physiological changes? Did they find any?

The phrase “who said they had” implies this may have been just anecdotal in nature. This brings to mind a recent case where this claim was made in a long and wild story of a man by the name of John Burroughs, who says he came close to a UFO that appeared to land in a forest outside a base in the UK on lease to the United States Air Force. At the time, he was working security at the base and along with others, approached the object. Years later, in a declassified study on UFOs done by the British government, it was speculated that these men might have suffered some physical effects from the object.

Burroughs did have health issues he believed stemmed from this incident and had to hire a lawyer to get veterans benefits. Incidentally, Burroughs’ efforts lead him to discover the section in the classified UK report that referred to his encounter and other yet to be released UK UFO files despite the fact that the UK had claimed to had released all of their UFO files. For his research, John Burroughs was awarded the UFO researcher of the year award at the 2015 International UFO Congress. DeLonge won that very award in 2017, and his video acceptance went viral early last year. You can read more about Burroughs’ efforts here.

The reason I went off on this tangent is because this case is well known. Is this the case that is being referred to in regards to studying “people who said they had experienced physical effects?”

It feels like we learned a lot in the last few weeks. The media seems to have boiled it all down to the idea that the government has taken UFOs seriously and perhaps it is a more credible topic than previously thought. That is a good takeaway.

However, there are many more questions that need to be answered, and it is likely more revelation will be forthcoming. I would venture to guess some of those revelations will be coming very soon.

Do you have some questions I did not include here? If so, let us know what they are below.