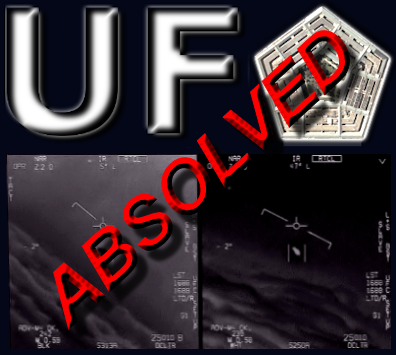 Vindication on the links

produced by CBS that often dramatized current events. On that particular evening, retired USMC Maj. Donald Keyhoe was on deck. He’d written a number of articles and books on what were then called flying saucers, and he charged the Air Force with concealing information from the public.

The moment Keyhoe tried go off-script, the director cut his audio feed, with millions watching, a move that begat one of the original and enduring American conspiracy genres. The ensuing public clamor prompted CBS to issue an acknowledgement that “This program had been carefully cleared for security reasons,” with the paternalistic assertion that “public interest was served by the action taken by CBS.”

Two months later, in damage-control mode, CBS scheduled Keyhoe for an unrehearsed interview with a young Mike Wallace. Keyhoe showed Wallace a copy of his earlier prepared statement, the one military censors redacted prior to the Circle Theatre appearance. Keyhoe had wanted to challenge the USAF’s contention that just 1.9 percent of all UFO cases were unknown; in fact, the Air Force had hidden the real figures inside something called Blue Book Special Report 14, which indicated 19 percent were unknown. Wallace, ever the provocateur, confronted Keyhoe with a critique from a popular columnist who wrote that “flying saucers are products of, for the most part, quote, pranksters, half-wits, cranks, publicity hounds, fanatics in general, and screwballs.”

This was Armentano’s introduction to The Great Taboo. His career track – advocate for libertarian policies, economics professor at the University of Hartford, adjunct professor with the Cato Institute – guided him safely away from those labels, but he kept a close eye on news from the fringe. So when The Times delivered its 12/16/17 scoop about how the Defense Department maintained a UFO research program, Armentano felt absolved enough to crow about it to the Indian River Press Journal near his home in Vero Beach.

“The deep intelligence state has known for at least 70 years that some UFOs were real,” he argued in an op-ed on January 17. The “decades-long public policy of secrecy and denial,” Armentano went on, “is foolish and dangerous in the extreme and puts our entire democratic process at risk.” He reminded Press Journal readers what happened to him in 2008, immediately after the paper published his call for federal transparency on UFO. That’s when Cato terminated its relationship with him, even though Armentano’s article never mentioned or hinted at his affiliation with the libertarian think tank. A Press Journal editor had attached a Cato blurb to his byline.

“I won’t deny that this latest op-ed played a role in our decision,” Cato Executive Vice President David Boaz informed Armentano, even as the Pentagon’s Advanced Aerospace Threat Identification program was quietly conducting its business, from 2007-12, at a cost of $22M. “Some day we may look back and wish we’d listened to you. But for now this strikes us as not an issue that we want to have as part of Cato’s research agenda.”

Armentano never asked Cato to add UFOs to its agenda, but no matter, Boaz couldn’t handle it, and it didn’t end there. Armentano got another reality check the following year, this time when he approached the Christian Science Monitor about writing an editorial on UFOs. It wasn’t as if Armentano was some unknown Goober. In May 2009, CSM published one of his opinions about President Obama’s new antitrust regulations. But this time around, just four months later, the Monitor said sorry, no thanks.

“UFOs,” explained CSM editor Josh Burek in an email to De Void, “are simply not on the public policy radar screen, not at a time when we’re debating health care reform, cap and trade, wars in Iraq and Afghanistan, North Korea, the recession, etc.” Furthermore, “Dom’s essay, like so many others, simply didn’t rise to a sufficient level of public salience and/or newsworthiness.”

That last part was a little peculiar, because Armentano hadn’t even submitted his essay for review, only as a topic proposal. Anyhow, Burek’s judiciousness apparently served him well. Today, he’s the director of Global Communications and Strategy for Harvard Kennedy School’s Belfer Center of Science and International Affairs.

In a UPI article carried by the Times, Hillenkoetter, the nation’s first CIA director (1947-50), voiced his dismay over the military’s hoarding of UFO data. “Behind the scenes,” Hillenkoetter declared, “high-ranking Air Force officers are soberly concerned about UFOs. But through official secrecy and ridicule, many citizens are led to believe the unknown flying objects are nonsense.” He accused the USAF of imposing a gag order on its personnel.

So it’s been a long journey for Armentano. A decade ago, “most of my professional colleagues in law and economics thought I’d lost my mind” following the Cato fiasco, he declared in the Press Journal this time around. Now that the former director of the Pentagon program has gone public, the Conspiracy Nut moniker doesn’t fit anymore, and Armentano’s golfing partners aren’t giving him much crap lately. Are they bringing new eyes to the subject now?

“No, not really,” Armentano tells De Void. “I don’t think they’re all that interested.”

UFOs: What Has the U.S. Government Been Hiding?