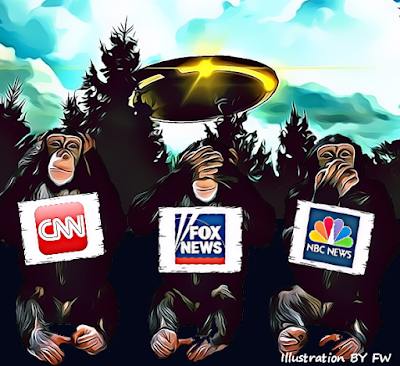 Newsweek mails it in

So it’s going on nearly three months since The New York Times yanked the curtains off the Pentagon’s now-famous UFO study, the Advanced Aerospace Threat Identification Program. And here we are, corporate media, sitting on our hands again, waiting for the Times or somebody else to run with the ball. Every now and then, on rare occasions, a pulse does twitch the EEG needle. Like last week, at The Fader magazine, when reporter Kelsey McKinney did a little homework and actually tried something different. She picked up the phone. What she came up with was an original Tom DeLonge angle — and one so obvious that nobody thought of it.

Here’s a rambling version of the setup:

How, exactly, does the former Blink-182 front man whose interviews make “less sense than the 40 ‘na’s’ strung together in the chorus of ‘All the Small Things” – a guy whose tales of secret rendezvouses with governmental techno-luminaries sound like, in McKinney’s words, “a conspiracy theory on steroids” – manage to coax some of those same folks off the sidelines to become board members of a still somewhat amorphous corporation called To The Stars Academy?

Well, according to The Fader’s premise, maybe it’s as simple as appealing to wonks who’ve nursed life-long rock-star aspirations of their own. True or not, it’s worth a read.

Anyway, that story is an exception. And last week’s oblivious puff piece by Newsweek more accurately reflects corporate journalism’s status quo. It had a provocative title, “What UFO Encounters Can Tell Us About Fake News and Climate Change Denial,” but even that sounded vaguely familiar. In September, The Atlantic Monthly ran excerpts of Kurt Andersen’s Fantasyland: How America Went Haywire, in which Andersen described public “belief” in UFOs as a cornerstone of our widespread delusions.

Newsweek reporter Meghan Bartels approached a historian and University of Pennsylvania doctoral candidate who’s been combing through the old Project Blue Book records for a dissertation. Researcher Kate Dorsch is calling it “Reliable Witnesses, Crackpot Science: The UFO Cold War in America.” On Penn’s site, Dorsch says her “project will also consider current issues in American anti-scientism as they present themselves today, including climate change denial and the anti-vaccination movement, while asking ‘Is UFO belief and study truly anti-science?’ (Currently, she would say no!)”

Bartels had a chance to get Dorsch to put those informed perspectives – along with Dorsch’s intriguing working conclusion – in context with the Pentagon’s $22 million UFO study. That might really set Newsweek up for a decent essay. Instead, Bartels stays in the shallow end and equivocates about “the division over what constitutes authority,” a phrase she uses twice. Sounds like a deadline flub. Hellooo, I need that UFO piece yesterday — hellooo! But if you want to know how this blown opportunity occurred, just look at how Newsweek has been handling this AATIP thing.

Since mid-December, the online version of the formerly relevant weekly has published at least eight pieces on the Great Taboo, all but one of which – Bartels’ submission last week – merely summarized all the other stories. Newsweek’s 12/17 article is a rehash of the Times’ AATIP coup. Newsweek’s 12/18 followup regurgitated the Times and the New York Daily News. On 12/19, Newsweek condensed the reporting of CNN, the Times, and the Washington Post without adding a lick of original material.

On 12/20, Newsweek trolled CNN’s interview with America’s celebrity astrophysicist, Neil deGrasse Tyson, and came up with this clever lead: “Neil deGrasse Tyson doesn’t give an F about all this UFO talk.” OK, what about a D-minus? Anyway, at least this story made a pretense of trying to perform due diligence by throwing in this line: “The White House did not answer a request for comment from Newsweek” about whether or not President Trump would renew AATIP’s funding. Yay.

Now, there’s nothing necessarily wrong with rewriting news stories so long as you provide sourcing; De Void wouldn’t be blogging today if it weren’t for other people doing the work. News aggregators have their place, I guess. But the most telling aspect of Newsweek’s UFO coverage is, the eight stories mentioned above have seven different bylines. How might that affect the big picture? Hm. One thing it means is that one poor reporter drew the short straw twice. Sorry, kiddo, it’s either that or mop the floor.

De Void suspects Newsweek could manage its online sausage factory more efficiently. For starters, why pay part-timers and freelancers to expectorate cold UFO hash that everybody already knows about? Why not assign them to something with a little more cleavage, like the Stormy Daniels beat? That’d be monster traffic, man.