A really strange event happened this week in Gudauri ski resort in the Caucasus Mountains, Georgia.

A live feed camera looking up a slope captured a pair of lights that suddenly appeared out of nowhere above the ski resort. The live feed also shows the moment that several people pointing to the strange bright objects. 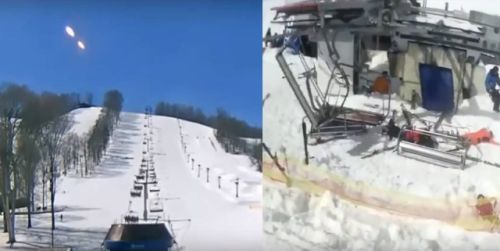 The unknown objects do appear really strange and I would assume it was not a natural sky phenomenon, but even stranger is the fact that at the moment the bright objects appeared the ski lift went out of control.

The ski lift suddenly started running backwards at high speed and skiers had to jump to safety while people who were unable to get off safely fell out of the chairlift, flying through the air.

Eight people suffered minor injuries but two people have been seriously injured, including a pregnant woman, after the ski lift went out of control.

Despite early information suggests a cable stalled and came loose, it is more likely that the malfunction has been caused by the UFO-like bright objects above the ski area.

The first video shows the moment the UFOs appear above the ski resort, the second and third video showing the terrifying moments the ski lift goes out of control sending people flying through the air.