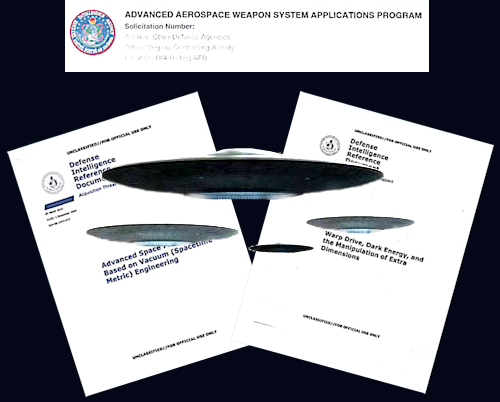 A question of ownership

The second, the 26-page “Warp Drive, Dark Energy, and the Manipulation of Extra Dimensions,” is dated 2 April 2010, and written by Richard Obousy and Eric Davis. Each report is “one in a series of advanced technology reports produced in FY 2009 under the Defense Intelligence Agency, Defense Warning Office’s Advanced Aerospace Weapon System Applications (AAWSA) Program.”

De Void is in no way qualified to assess the merits of these analyses, both highly technical in nature and written for specialized audiences. There is no mention of The Great Taboo, nor are there any specific references to what might have been learned directly from the celebrated five-year study of UFOs mentioned in the groundbreaking New York Times story in December. What seems pretty obvious, however, is that both papers are addressing, in theoretical terms, how to emulate observed and recorded UFO flight behaviors, which are couched in careful euphemism. States one report, investigators are “examin(ing) these effects as they would be exhibited in the presence of advanced aerospace craft technologies based on spacetime modification.”

They discuss “corollary side effects” of such technologies, which would “mimic known refractive index effects” and “indistinct boundary definition associated with ‘waviness’ as observed with heat waves off a desert floor.” And “yet another possibility is the sudden ‘cloaking’ or ‘blinking out,’ which would at least be consistent with strong gravitational lensing effects that bend a background view around a craft, though other technical options involving, for example, the use of metamaterials, exist as well.”

In short, both studies indicate these “advanced aerospace craft technologies” could indeed bridge interstellar distances, with what would appear to be insane maneuverability, by creating conditions like a “warp bubble” that “never travels outside of its local commoving light cone and thus does not violate special relativity.” Such a scenario “would appear to mitigate against untoward effects on craft occupants associated with abrupt changes in movement.” The authors introduce calculations they insist constitute a “novel warp drive concept,” adding “it has never before been suggested that this might facilitate a new and exotic form of propulsion.”

Just how many studies in the AAWAS series exist? No info in Knapp’s report on that, yet. But included with the release of these two reports is a separate “Statement from a Senior Manager of BAASS,” which should concern us all.

In 2009, during the 2007-2012 time frame the DIA’s Advanced Aerospace Threat Identification Program was actively investigating UFO technology, BAASS – Bigelow Aerospace Advance Space Studies – entered into a contract with the mostly volunteer civilian nonprofit Mutual UFO Network for exclusive access to its UFO data. The arrangement, financed by Bigelow, fell apart within a year; since then, MUFON’s credibility has taken major hits as a result of unrelated self-inflicted leadership moves. But as Richard Lang, who coordinated the joint BAASS-MUFON project, pointed out seven years ago, although BAASS had access to MUFON witnesses, it conducted its own lines of inquiry as “a private research organization” that “do(es) not share their proprietary information and research with MUFON.”

Bleakley indicated the investigations considered “a lot more than nuts and bolts machines that interacted with military aircraft. The phenomenon also involved a whole panoply of diverse activity that included bizarre creatures, poltergeist activity, invisible entities, orbs of light, animal and human injuries and much more.” She stated BAASS regarded “the human body as a readout system for UFO effects by utilizing forensic technology, the tools of immunology, cell biology, genomics and neuroanatomy” in order to “bypass UFO deception and manipulation of human perception by utilizing molecular forensics to decipher the biological consequences of the phenomenon.” Concluding sentence: “The result of applying this new approach was a revolution in delineating the threat level of UFOs.”

And like, wow, that’s it? That’s all you’re gonna tell us? Really? And you want applause for your “revolution”? This sounds like a big-time tactical error by BAASS. Who in their right mind hangs this kind of stuff on the line and expects people to walk away without asking some very basic questions? Who paid for this research? Bigelow? Uncle Sam? Both? When do we taxpayers get to see the results? How about the names of all the contributors? What are you thinking?