Authorities in Pennsylvania are at their wit’s end over a series of mystery booms that have plagued parts of the state for weeks and now hope that the FBI can help provide some answers. 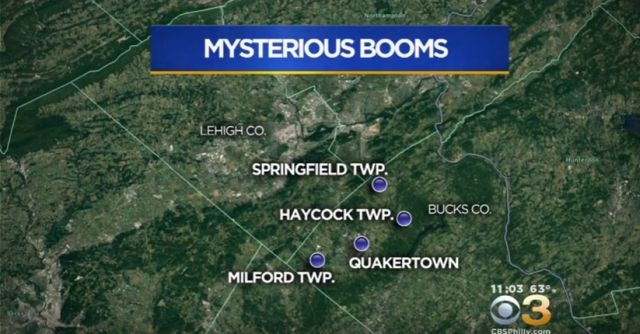 According to a report from Philadelphia, the “explosion-like sounds” have been reported by a striking number of witnesses, believed to number in the hundreds.

An array of possible sources for the booms have been suggested, including sonic booms, construction of a clandestine underground tunnel, tectonic plates movements, earthquakes but so far no one can put their finger on exactly what is the cause of the booms and sounds.

The Pennsylvania incidents are just the latest chapter in a litany of similar cases which have been reported throughout the United States. Locations as diverse as Colorado, Dallas, Maryland, and South Dakota, have all experienced the phenomenon that continues to happen throughout the country, reports philadelphia.cbsloca.

In the following video Alex Hoff reports on the mysterious booms.