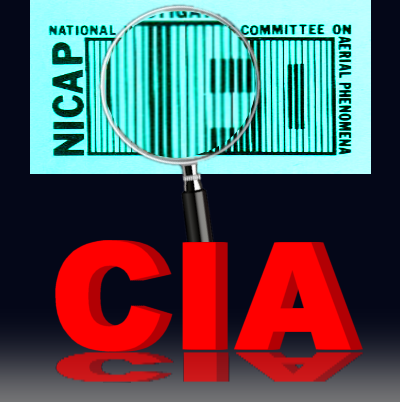 Editor’s Note: The following is an excerpt from the upcoming book, Flying Saucers From Beyond the Earth: A UFO Researcher’s Odyssey, by Gordon Lore, scheduled for publication on October 1, 2018, by BearManor Media-FW

NICAP as a new staff member. (Keyhoe later told me that Nixon had been hired as “a favor” to “a friend.” As he continued, I got the idea that the friend may have been Colonel Joseph Bryan, Chairman of NICAP’s Board of Governors.)

During his first week at work, Stuart approached my desk and, with a somewhat stumbling aura of authority, announced: “Gordon, I am here to coordinate some changes that will need to be made.” Suddenly, he drew back, as if he had said too much.

“What changes are you talking about, Stuart?” I asked. “Who sent you here?”

“Oh, never mind,” he nervously replied. “Sorry…. I shouldn’t have said anything. I’m just here to help you guys through the rough times.”

A red flag had been sent up. Shortly after that, Stuart told me that the NICAP photographer, William (“Bill”) MacIntyre—who had also mysteriously come into the picture at about the same time as Nixon—had been shot down in his helicopter in Vietnam in 1965. He was supposedly on a secret mission with the Central Intelligence Agency (C.I.A.), Stuart openly remarked with some degree of admiring glee.

It didn’t take me long to wonder if Nixon may have been sent there to recruit me for a possible C.I.A. takeover of NICAP. I had heard from Dick Hall that two of the agency’s operatives had visited the NICAP office before I came on board and spent several hours scrutinizing the sighting reports. I soon realized that Don Keyhoe himself may have opened the door for that eventuality by appointing Admiral Roscoe Hillenkoetter, the first Director of the C.I.A., Chairman of the NICAP Board of Governors. The Admiral and Keyhoe had been friends since their days long ago as cadets at the U.S. Naval Academy in Annapolis, Maryland.

Other board members—including Colonel Joseph Bryan and Dewey Fournet—had also been C.I.A. operatives. They were among the many contacts Keyhoe had established in the military, the Pentagon and the intelligence agencies. They would serve him well in obtaining UFO reports he could use in his books and at NICAP. I was also beginning to realize that this infiltration would serve them well if they really had the goal of taking over control of the world’s largest UFO organization.

NICAP may have been infiltrated by the Central Intelligence Agency from its very beginning. According to a UFO Updates article by early NICAP supporter, Jan Aldrich, during the group’s first year under the original Director, T. Townsend Brown, “several mysterious persons managed to fit themselves into NICAP’s structure.” One of these was Nicolas de Rochefort, a Russian immigrant who was a French and Russian script writer for Voice of America. Rochefort was also a member of the C.I.A.’s Psychological Warfare Staff. Another earlier NICAP staff member during its first year of operation was Bernard J.O. Carvalho, from Portugal, who was “involved in C.I.A.-owned companies.”

By the end of 1956, Brown’s leadership came to an end due to his inability to successfully handle the NICAP funds. Don Keyhoe took over as the Director and started to beef up NICAP’s prestige by appointing some prominent individuals to the group’s Board of Governors. Meanwhile, Admiral Hillenkoetter began making a number of positive statements on UFO reality. Don Keyhoe was happy about this, but Hillenkoetter’s position on the board became tentative when Keyhoe became a fierce opponent of government secrecy and pushed for Congressional hearings during the early 1960s.

Hillenkoetter quickly resigned from the NICAP Board. He later said that the group had gone as far as it could and “no further criticism should be aimed at the Air Force for its handling of UFOs.” There was also speculation that, as a former Director of the agency, his pro-UFO statements were causing “considerable embarrassment” to the CIA.

Had the stage been set for NICAP’s eventual downfall? It seems that was the case.

That evening, I called Don Keyhoe at his home in Luray, Virginia, and told him what Nixon had related to me. There was an uneasy period of silence.

“What do you think, Major?” I asked. “Could Stuart Nixon be a C.I.A. operative?”

I wondered if either Hillenkoetter or Bryan had asked the Major to pipe Nixon aboard the NICAP ship of UFO state. But further pressing by me on the matter yielded nothing more from Keyhoe.

Following the public release of the Condon Report, the prospects for NICAP continuing as a viable UFO organization quickly took a downward spiral. Adding fuel to the fire, unfortunately, was Keyhoe himself. Being an organizational and money manager was not his cup of tea. Some had even compared him to “a second Townsend Brown.”

In a secret meeting on December 3, 1969, the NICAP Board with Colonel Joseph Bryan III presiding, fired both Keyhoe and myself. It soon became apparent that I had to be terminated as a convenient “scapegoat.” Dick Hall quickly came to my defense. On December 9, he wrote a lengthy letter to the Board of Governors explaining why I had consulted with him in my attempt to help put NICAP back on a safe financial footing. Hall wrote:

Gordon has consulted with me at critical times in taking the steps which have now led to his being summarily fired…. Until now, I have kept silent about internal NICAP matters in the hope that quiet reforms could be made and a constructive program continued. Now I am incensed both by the injustice of what has been done and by the crude manner in which it was done.

On December 5, Gordon was informed by telegram… that his services were no longer required. He was given no advance notice. Furthermore, when he walked into the office to collect his personal effects, he discovered that they had been searched, his desk had been rifled and all the door locks had been changed by Stuart Nixon… allegedly acting under instructions from [NICAP Board Member J.B. Hartranft]. Exposure of such Gestapo-like tactics is sufficient commentary on them.

What grave sins did Gordon commit which resulted in his being treated like a common criminal? Over recent months, quietly to avoid a damaging uproar, he discreetly approached members of the Board to inform them of the seriously deteriorating situation, hoping they would intervene and lead the way in making long overdue reforms. In my view, he was very conscientiously and properly attempting to correct long-standing problems and to save NICAP from the scrap heap….

It is anger over the injustice that has been done, and the fateful decisions made in secret, which now motivate me to alert the entire Board to the tragic state of affairs.

I fought many of the same battles as Gordon… and have some feeling for what he has gone through…. On more than one occasion, I recognized the need for the Board to be kept informed and drafted detailed reports to [them]. These were always pigeon-holed by Major Keyhoe. When that approach failed, I initiated the Affiliate/Subcommittee Newsletter, with copies to the Board so that you would at least have some general indication of how things were going. But it could not include the same detail as would private reports. Gordon went further because the situation and times called for it, but now he has been made a scapegoat….

I can assure you that both Gordon and I have, on the one hand, been very reluctant to hurt or thwart Major Keyhoe in any way or, on the other hand, to see NICAP reach the state that it presently has. Some present and former staff members have been after Major Keyhoe’s scalp, but Gordon and I have always argued for systematic reform through the Board….

Gordon found himself in the unfortunate position of mediating between an unhappy staff and an adamant Major Keyhoe who had lost his grip on things and who remained remote from the office. For the man in the middle, this can be an extremely frustrating position.

As funds declined, staff members were laid off…. As debts increased , office space was cut in half. Virtually all research and writing ground to a halt. Gordon had only two staff members…. The situation became truly critical. The need for rebuilding was obvious, so Gordon approached two members of the Board in confidence and sought their help…. Gordon’s role was to alert and involve the Board without causing a panic because he was dedicated to the continuance of NICAP on an improved basis….

I am saddened by the deterioration of NICAP and see no hope for its future. In firing Gordon Lore, the Executive Board has removed the last hope for a gradual change-over to a publications program which might put NICAP back on its feet financially….

A couple of years later, I learned through Just Cause that Colonel Bryan was, indeed, an active CIA agent even as he led the charge to fire Keyhoe and I.

To this day, as 2017 draws to a close, I am still saddened by the collapse of NICAP. During its years under Keyhoe’s direction, the organization had been responsible for bringing a high degree of scientific credibility to the well-documented and investigated UFO sightings. And it had been the linchpin in persuading many scientists such as Jim McDonald to continue their own efforts in keeping the well-documented and investigated sighting reports in the eyes of both the public and the scientific community.

Additional information concerning NICAP’s final year is included in Chapter Four of my book Connections: A Lifetime Journey Through the World of Celebrity (2017), also published by BearManor Media.

[This excerpt is from the book Flying Saucers From Beyond the Earth: A UFO Researcher’s Odyssey, by Gordon Lore, scheduled for publication on October 1, 2018, by BearManor Media. Gordon was the Assistant Director/Vice President of NICAP from 1965 to 1970 and the President of UFO Research Associates (UFOR) from 1970 to 1980. He worked directly with Major Donald E. Keyhoe, Richard H. Hall and Dr. James E. McDonald, among others such as Francis Ridge and Barry Greenwood, and considered them close friends and mentors. Gordon is also the senior author of the best-selling Mysteries of the Skies: UFOs in Perspective (Prentice-Hall, 1968) and the sole author of Strange Effects From UFOs (NICAP, 1969). He is also the author of The Earle Family of Newfoundland and Labrador (DRC Publishing, 2015), The Priest of Kali: A Novelized Biography Based on the Life and Spiritual Ecstasies of Sri Ramakrishna (Amazon, 2017) and Connections: A Lifetime Journey Through the World of Celebrity (BearManor Media, 2017). Gordon may be contacted at [email protected] and