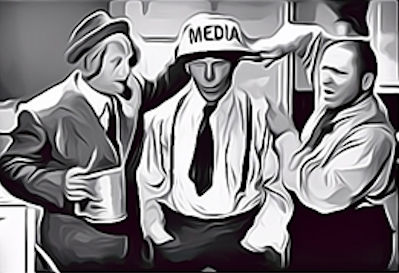 God knows, De Void makes mistakes aplenty, but Newsweek has demonstrated such a consistent pattern of ineptitude when it approaches The Great Taboo it’s like watching Inspector Clouseau in a shootout with Pablo Escobar. The only thing it didn’t totally screw up was its takedown of the hapless Mutual UFO Network in April. But that was like burning ants with a magnifying glass – not very sporting.

Now, the Washington Post, on the other hand – watching WaPo drop the ball on UFOs this week with its regressive formula spin is to understand it doesn’t have a clue about how to push this conversation forward. Let’s start with the headline, in toto: “UFOs are suddenly a serious news story. You can thank the guy from Blink-182 for that.”

If by “suddenly” it means six months ago then, yeah OK, that adverb’s solid gold. As for “the guy from Blink-182” – spoiler alert: Tom DeLonge’s involvement with The Great Taboo has been out there since, well, at least since WaPo did a spread on Tom DeLonge’s involvement with The Great Taboo in March 2017. But you’d never guess that from this week’s Captain Obvious Award winner. Here’s the WaPo’s idea of a provocative setup:

“You’ve seen it without knowing it.” I have? Really? Me? “Remember that wild news in December about a secret Pentagon UFO program?” Welllll, now that you mention it … “And those grainy military videos showing radar images of unexplained phenomena – white, Tic-Tac-shaped objects that appear to fly at remarkable speeds, at impossible angles, without wings or exhaust?” Yes! Yessir I do! Got my ears on now, bruh, bring it! “Tom DeLonge helped ring the alarm about those things, as part of his new business venture: To The Stars Academy of Arts and Science.” Oh. We’re having stale bread. Again. Good. We were almost ready to give up hope.

You know, maybe if I lived in Yemen or Pyongyang, or if I couldn’t leech off magazines like Billboard and Mother Jones, I might be a little more appreciative of these patronizing leftovers. After all, let’s face it, six months have passed since The New York Times broke the story about the Pentagon’s Advanced Aerospace Threat Identification Program (AATIP), and we’re still waiting for a meaningful followup. Despite the fact that we readers are losing interest in damn near everything these days, our attention spans are collapsing, and our memory-retention lights are flashing red.

But here’s the part of the headline an editor should’ve deleted altogether – “a serious news story.” Really? Leaving the frontier for the clogged double lanes at the drive-thru is serious? Reporter Dan Zak lets ‘er rip — “the subject carries the odor of crazy” — and quotes oft-quoted usual suspects SETI evangelist Jill Tartar and Skeptical Inquirer mainstay Robert Sheaffer. Sheaffer’s as reliable as gravity when it comes to dissing “a couple more blurry videos that are similar to the blurry videos we’ve had before this.”

But the real disappointment: The Times worked the 12/16/17 AATIP coup with two Pulitzer Prize-winning bylines, Helene Cooper and Ralph Blumenthal. The Post put its own Pulitzer pedigree, Joby Warrick, on the story and published the same day. It looked like an old-fashioned newspaper war was shaping up.

Here’s the deal. Forget about UFOs shadowing naval exercises off the coast of California. What nobody wants to talk about is nuclear weapons. Or, more specifically, UFOs’ ability to operate unchallenged in restricted airspace over U.S. missile fields in the Northern Plains. That, plus our inability to stop it. That’s the story nobody’s writing. De Void’s wishful thinking: Maybe the media are being patriotic by not telling Little Rocket Man just how porous our sovereign skies are. But they are. And they’ve been that way for a long time.

Many of the veterans who’ve gone on record only after years of separation from the military are dying off. Are UFOs continuing to keep tabs on our WMD? The only researcher actively trying to find out is author Robert Hastings. The military doesn’t issue press releases on this stuff, and the media won’t even address data that’s been languishing for decades in the public domain. The story isn’t dead, just ignored.

One thing we know for sure is, the UFOs haven’t gone away. But if the corporate newshounds decide to put the nuke angle on the table, I promise to replace the butt-ugly dog photo up there with something less offensive. And trust me, folks, it’ll be very very incredible, that I can tell you.