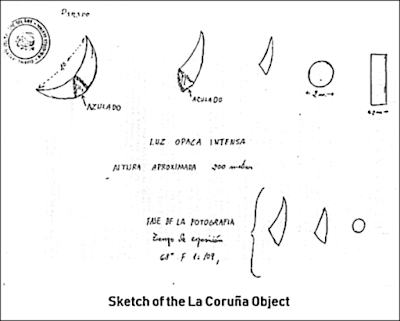 If we suppose that UFOs are technological devices created by aliens, it is logical to suppose that some of them may have become damaged, or may have even crashed, during their visits to our planet. In greater or lesser measure, we follow the ups and downs of the Roswell Incident, seemingly one of the first worldwide cases involving crashed UFOS, yet not the only one. However, does Spain have any documents that enshrine an event of this nature?

The answer is yes.

On April 2, 1966, an unidentified flying object fell into Mar de la Graña, across from the Galician locality of El Ferrol. It is the first UFO case recorded on Galician territory and forms part of the official files of the Ejército del Aire (Spanish Air Force), which are accessible through the Ministry of Defense’s Virtual Library online.

UFOs had hitherto been a concern, but were not investigated. Between June 1967 and October 1968, Spain experienced a “flap” of sightings that eventually involved aircraft in flight, both military and commercial, having a powerful impact on the media. After a secret meeting attended by only seven generals of the Ejército del Aire, a message was put forth, requesting citizen cooperation in notifying sightings to the authorities.

On December 17, 1968 the UFO subject was concentrated in the Operations Section of the Senior Staff of the Air Force, and finally on 26 December, Circular Letter 9266-CT was issued, setting forth research standards and classifying the matter as confidential.

By then, the first UFO crashed in Spain was already under the waters of Mar de la Graña. It had all begun on 23:30 hours of April 2 at the La Carreira Radio Station. As the declassified report indicates, a corporal on duty, a watchman and two sailors witnessed “a sizeable object in the sky, emitting an opaque light, and changing its shape approximately every five minutes.

The corporal was able to photograph the mysterious object from the Navy communications center located between the towns of Narón and Valdoviño in the district of El Ferrol. The lieutenant commander in charge of the radio-telegraph station instituted an investigation showing that “the object was to the left of Monte Campelo, one of the highest points in the Province of La Coruña, where a major military base was located.

The object flew over the Astano Shipyards where several warships were under construction and then headed toward the opening of the firth without leaving any visible signs in the sky. According to eyewitnesses, it wound up falling into the sea. 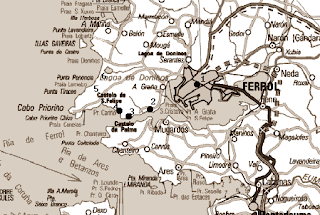 Diario Público reported: “When fishermen arrived at the Port of Ferrol with the UFO, a group of long-faced Navy officers were there to meet them and relieve them of the object, sternly warning them to keep their mouths shut about it. The object was loaded onto an army transport and escorted to La Graña in a convoy. The UFO was hidden in one of the tunnels within the La Graña submarine base.

The Navy reported the find to the U.S. base in Rota. A group of U.S. military men reported to El Ferrol to take custody of the “device” on a military truck. Nothing else was ever known about its whereabouts.

Renowned ufologist Miguel Pedrero, editor of Año Cero magazine, managed to locate some witnesses who took part in the recovery of that yellowish object, whose size was comparable to that of a North American F-86 Saber.

Part of the operations took place aboard a fishing trawler called “Reina María”. One of the sailors, Jose Fernández, recalls: “It was like yellowish Polyspan, but weighed some 200 kilos. It was hard getting it aboard and we set it on the bow.”