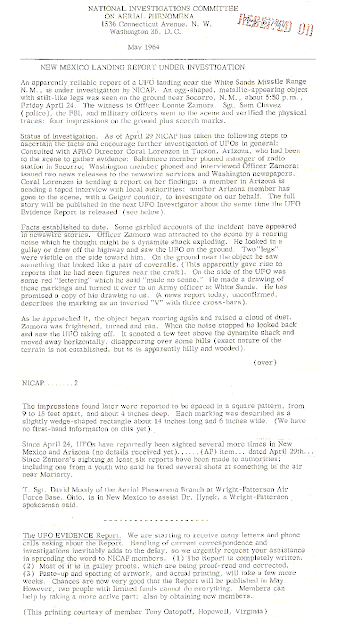 as details exploded and shot like missiles to news agencies all over the world. 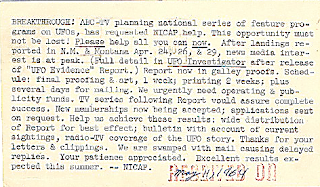 The Socorro event was hardly an isolated incident, however, as NICAP and other organizations, began receiving sighting — and encounter — reports nonstop. In response, as May, 1964 arrived, NICAP issued to members an alert about the Socorro case, and also dispatched postcards intended to capitalize on media attention. NICAP, we must realize, was very much a lobbying organization, in addition to serving as a profoundly effective UFO investigative entity, and when UFO publicity was high on the public mind there was no better time to “strike while the iron is hot” to increase public, and especially, Congressional attention.

Also mentioned is NICAP’S The UFO Evidence, an amazing 1964 report on the verge of publication, under assistant director Richard Hall’s brilliant editorial supervision, which would be sent to every member of Congress in 1964. Filled abundantly with important military, government, airline pilot and other UFO reports to confound conventional scientific explanations, this NICAP document remains one of the top publications ever released about the UFO enigma.