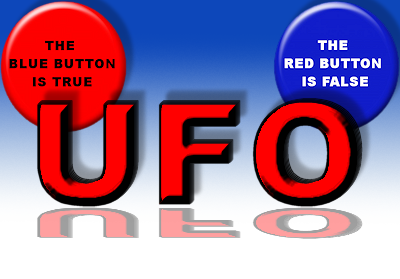 Bishop was prominently featured in Mirage Men, a 2013 documentary written by Mark Pilkington and directed by John Lundberg and others. The film explores at length thecircumstances of Bennewitz’s ill fated association with Richard Doty, who, during the time in question, was an Air Force Office of Special Investigations Special Agent. Bennewitz also became acquainted with UFO researcher William Moore, further sealing the confused Bennewitz’s unfortunate fate.

The work of Bishop and Pilkington is essential material in gaining understandings of what’s known and speculated about the Bennewitz chain of events, as well as the general intelligence community propagation of UFO-related stories. An abundance of unsubstantiated assumptions about UFOs and their extraterrestrial, underground dwelling, cattle mutilating pilots – which are now commonly yet mistakenly taken for granted as accurate – can be directly traced to events and the cast of characters surrounding Paul Bennewitz. And none of it was true.

Also deserving mention is an article by Alejandro Rojas titled, Open letter to the U.S. Air Force regarding allegations of UFO disinformation. The 2014 piece takes readers through the FOIA efforts of Rojas surrounding the Bennewitz case. The citations contain a wealth of material for potential further FOIA requests. FOIA subject material may also be mined from Project Beta and Mirage Men.

My FOIA efforts include submitting the above material quoted from Project Beta to multiple agencies. Former Special Agent Doty apparently told Bishop about investigations surrounding Bennewitz. I have yet to receive any positive responses but, as often seems to be the case with such matters, my preparation to appeal the unfilled requests presents more circumstances worthy of FOIA submissions.

Take, for example, statements below contained in a letter written by Doty and sent to Jim Moseley, published in Moseley’s July 15, 2000 edition of Saucer Smear: 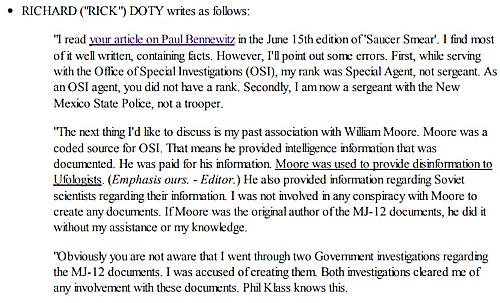 I encourage interested parties to cite specific published statements as quoted above and submit FOIA requests for files which may have resulted from the alleged circumstances. In the above example, requests might be sent to AFOSI and the National Archives and Records Administration (NARA).

While I find such circumstances intriguing, their relevance arguably goes much further than how interested we may be. There is actually a very important reason to better inform ourselves of past events: It teaches us better understandings of current events.

Adam Gorightly has a forthcoming book exploring the cultivation of a great deal of questionable UFO stories. He takes a close look at tales surrounding Dulce, the big reveal that never happened at Holloman AFB, the birth of the infamous Serpo fiasco, and much more. I look forward to the release of the book and resulting discussions.
I contend it is important to be aware of these stories because doing so demonstrates the critical significance of prioritizing established facts over suppositions. It should be understood that statements need not be immediately discounted, nor should we necessarily distrust people with ties to the intelligence community. An important point is that there are extremely well documented instances of individuals going to great lengths to control the UFO narrative for a variety of reasons. That being the conclusively demonstrated case, we should proceed with caution – whether someone with a story worked on the federal payroll or not.

There is no substitute for transparent research practices and making evidence available for public review. We should expect those making claims to understand this as well. As history teaches, beware those who minimize transparency and talk in circles. It doesn’t mean every story is not true, but it’s not like we don’t have valid reasons to suspend judgment until verification comes along. To criticize those who do so is unreasonable.