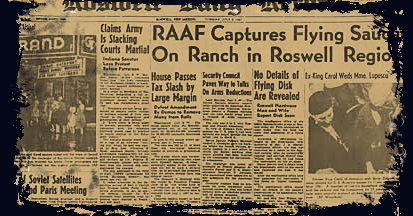 recovered crash debris. But Ruppelt had no need to know if there was crash recovered debris from earlier investigations. His mission was the investigation of sightings reported to the Air Force, and the gathering of what might be considered essential items of intelligence. He could do his job without being told that debris had been recovered from a crash. His statement isn’t particularly troubling, given the circumstances and his position in the UFO investigations.

There was another document, a top-secret report entitled Air Intelligence Report No. 100-203-79 and dated December 10, 1948, with a second version dated April 28, 1949. The officers responsible for it make no mention of crash recovered debris. But the officers involved suggested there could have been some project or information that would have explained everything about the flying saucers if a free flow existed. In other words, this report doesn’t exclude Roswell, given that the officers didn’t have access to everything, as they themselves, noted.

Lieutenant General Nathan Twining, in a letter he wrote on September 23, 1947, mentioned the lack of crash recovered debris. It might be important to know that the letter was probably written by McCoy for Twining’s signature. But the information used to form the opinion had been supplied by Lieutenant Colonel George Garrett through Brigadier General George Schulgen. The sightings and information supplied by Garrett contained no references to crash recovered material. Twining could accomplish his goal without referring to crash recovered debris and would have no motive for adding that information to his letter. The reference in the letter was about the lack of debris in the supporting documentation supplied, not actually saying that no such debris existed. It doesn’t close the Roswell door at all.

Then there was the quote from the Science Advisory Board in which McCoy said that they wished one would crash. The problem is that the information in the briefing was classified only as secret and some of the participants might not have held top secret clearances. Besides, we run into that pesky “need to know.” In other words, this is not the fatal bullet to the Roswell case, given the circumstances.

The real problem and the one that has been basically ignored by the various commentators here and in other arenas is McCoy’s letter to the Chief of Staff of the Air Force on November 3, 1948. It was a long letter discussing flying saucers. This was a recap of what they knew, or thought they knew about the “Flying Objects,” according to the documentation available. In paragraph 8, McCoy wrote:

The possibility that the reported objects are vehicles from another planet has not been ignored. However, tangible evidence to support conclusions about such a possibility are completely lacking (I have highlighted this because of its importance).

This is the deadliest of the quotes. Because of who McCoy was, I believe that he would have known about any recovered crash debris. He had been running the unofficial UFO investigation until the Arnold sighting in June, 1947, when it became more of an official study. He was on the inside from the very beginning, and he was a key member of Twining’s primary staff.
The second real problem here is that McCoy would have no expectation that this letter would be seen by anyone other than those to which it was addressed and it was going to the top guy in the Air Force, especially since FOIA didn’t exist then. As I mentioned, he wouldn’t dare lie. If there had been a crash, he was writing to those who would know about it; more importantly these were the people who had to know about it because they would be directing policy. They might not have all the minutia of the crash or what had been learned by the reverse engineering, but they would know that there had been a crash of something that was highly unusual. They would know that this was a craft that had not been build on Earth.

When we look at those first few examples about a lack of crash debris, we can, I believe, with intellectually honest candor, suggest that this does not close the door on Roswell. There are cracks in those documents. But the last one, by McCoy, is the one we must look at carefully. There is very little wiggle room here. McCoy either didn’t know or he was lying to the Chief of Staff of the Air Force. Since it is clear that he wouldn’t lie to the top officer in the Air Force, we are left with the idea he just didn’t know. This seems to be preposterous. McCoy was in the inner circle…

That leads us to the conclusion, based solely on the documentation from that time frame that the answer to the Roswell crash does not lie with the stars.

There is, of course, always the possibility that there is missing information. And, we have to look at the testimony from those who seemed to have no reason to lie about this from Bill Brazel to Edwin Easley to Loretta Proctor and a dozen other low-ranking military men and to the civilians who lived in the area.

I can say, without fear of contradiction, that something fell near Corona, New Mexico in July 1947. The question is still, “What was it?” The answer, today, is less clear than it was a decade ago. All I can say is that this one letter from McCoy worries me greatly and it should worry anyone else who believes that Roswell has an alien solution.