A photographer has captured three transparent spheres over Lake Okanagan. The spheres are exactly the same and inside every sphere is a similar figure visible, something what is characteristic of other comparable spheres with figures inside spheres. 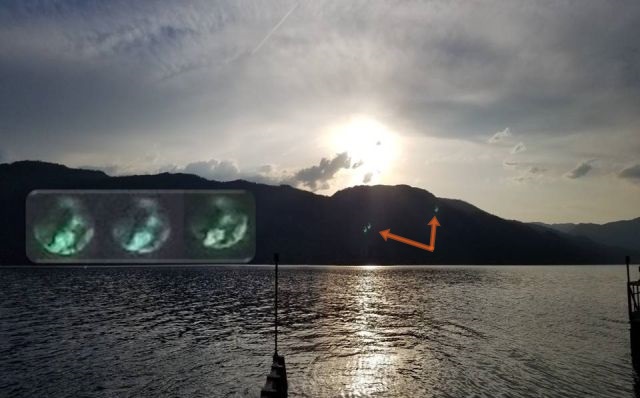 At first glance it looks like a camera reflection, but these spheres look quite different in comparing with the typical full greenish and bluish dots in the sky caused by camera reflection.

Photographer says: On July 10, 2018, on the way back from a motorcycle trip in the North Okanagan, British Columbia, Canada, we stopped one last time in the late afternoon at Okanagan Centre, Lake Country, to watch the sun hovering above the westerly mountains over Lake Okanagan.

I took several pictures overlooking the lake, in a westerly direction, of Okanagan Centre Road.

At this particular time, my fiancee and I did not saw or heard anything flying in the air. However, after viewing the pictures on our computer screen, we noticed what appears to be “3 orbs”. 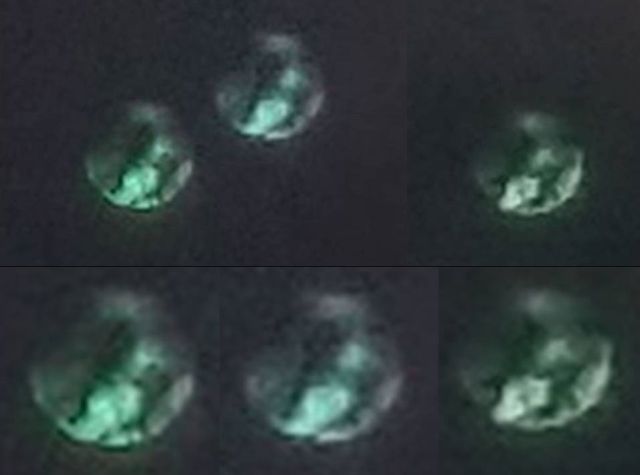 On closer observation however, the “objects” seem to be of perfect round shapes. They seem transparent with some reflection from the inside. One can see what appears to be some greenish light.

The other pictures we took, we haven’t found anything out of the ordinary. Several pictures were taken within several minutes. Photographer has submitted the image to Mufon case 94181.