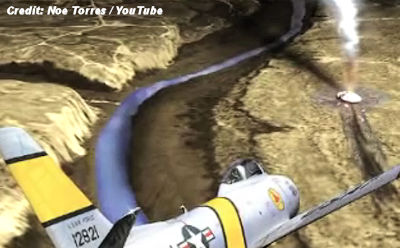 Then, according to the radio program, and a brief transcript offered at a number of UFO related websites, Davis said, “Yeah, they’ve got…I would say…you know…If you’re going to throw your bets on Roswell, your bet’s really good. Del Rio, Texas, that was a 1950s case, that was another one, and the other ones I won’t bring up because those are still classified.”

That was the extent of what he said about the Del Rio crash. He added, “But um… and they have not been investigated to my knowledge, I’m sorry, they have not been REVEALED or PUBLISHED to my knowledge. So without knowing that that’s the case I won’t talk about it any further, but we have crash retrievals and they’ve been analyzed and unfortunately our laboratory diagnostic technologies and our materials sciences and the understanding of physics that we had were not advanced enough to be able to make heads or tails of what it is, of what they had their hands on.”

And that is it.

If he knew more about the case, or had communicated more about to anyone, I wanted to know because I had come to believe that the Del Rio crash never happened. Too much of the information had radically changed over the years in a way that suggested the tale was untrue. But, in UFO research, you are required to take a look at anything that seems to be new and that provides, well, a different perspective.

The first question is: What do we know about Dr. Davis?

According to his biography published around the Internet, we learn that he has a Ph.D. and “is the Chief Science Officer of EarthTech Int’l, Inc. and the Institute for Advanced Studies at Austin. Dr. Davis’ research specializations include breakthrough propulsion physics for interstellar flight, interstellar flight science, beamed energy propulsion, advanced space nuclear power and propulsion, directed energy weapons, future and transformational technology, general relativity theory, quantum field theory, quantum gravity theories, experimental quantum optics, and SETI-xenoarchaeology.”
So, the next step is to take a look at this EarthTech Int’l website. There we learn more about his background. According to the website he is also described as:

Dr. Davis serves as an Adjunct Professor in the Early Universe, Cosmology and Strings Group at the Center for Astrophysics, Space Physics & Engineering Research at Baylor University in Waco, TX. He earned his Ph.D. in Astrophysics from the University of Arizona in 1991.

Dr. Davis is a Fellow of the British Interplanetary Society, Associate Fellow of the American Institute of Aeronautics and Astronautics, and a member of the New York Academy of Sciences, Directed Energy Professional Society, SPIE, American Astronomical Society, and Association of Former Intelligence Officers.

That sounds pretty impressive. He has also written a number of peer reviewed papers and published a long list of other articles. So, the next thing to do is look at the organization for which he works. There we learn:

The Institute for Advanced Studies at Austin was founded in 1985 by Harold Puthoff, PhD, and later incorporated under EarthTech International, Inc., in 1991 as an innovative research facility with a high‐powered creative staff dedicated to exploring the forefront reaches of science and engineering. Our research interests include theories of spacetime, gravity and cosmology; studies of the quantum vacuum; modifications of standard theories of electrodynamics; interstellar flight science; and the Search for Extraterrestrial Intelligence, specifically as these topics may apply to developing innovative space propulsion and sources of energy. We strive to translate these ideas into laboratory experiments.

I guess the point here is that he doesn’t sound like your typical UFO guy. His credentials seem to be solid and his work seems to be advanced. That just brings us back to his comment about Del Rio. Is there more to that?

Everything that I can find suggests he just made the one comment on Coast-to-Coast. George Knapp couldn’t tell me anything more but did mention that Davis had said he was getting a lot of emails after his appearance on the show. That was not much help.

Ruben Uriarte, who was delighted with the endorsement of the Del Rio crash, didn’t know anything more about it either. He thought it would be great to obtain additional documents from the Mexican government or the US military about the crash. That, of course, presupposes that there are documents from either of those sources, which Davis seemed to imply but I have no information that this is accurate.
I did attempt to learn more from Davis, but my emails to him went unanswered. I, as did so many others, wanted to know what additional information he could supply. Without anything, we are left with only the original source of the tale, Robert Willingham, who claimed to have been an Air Force officer, a fighter pilot, and the one who had seen the crashed craft in Del Rio. The problem is, Willingham was none of those things, and rather than repeat all the information here, I’ll just suggest you take a look on what I found several years ago. You can read it here:

Or, if you are interested, I published a list of the various articles about Willingham which also covers some of the other problems with his tales here:

That first article will let you sort through quite a bit of information about the Del Rio crash in all its various incarnations and the ever-shifting date as supplied by Willingham. For those of us who actually served in a combat environment, who were actually military pilots, the whole Willingham tale is an insult.

The problem for me is if Dr. Davis has no additional information and was relying on the statements made by Willingham, then that calls some of his other comments into question. The Del Rio crash can be traced only to Willingham and there is no corroboration for it. That’s why I was surprised that Davis had mentioned it specifically.

And that is what so frequently happens in UFO research.