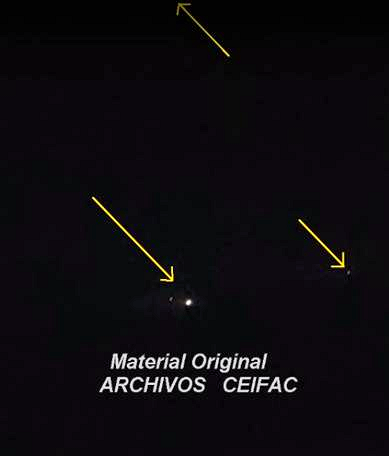 Due to the objects’ movements, one of the flights had to
detour some 20 miles off its course to insure passenger safety.

discussed again only a few months ago, as the conversations between the pilots aboard became known.

The airliners were on their scheduled runs with nothing to report until a LAN-Chile airliner reported the presence of some lights near a control point known as Livor.

Shortly after, a pilot for the COPA airline confirmed it with a photograph, capturing 3 shiny unknown objects. A total of five LAN-Chile flights and one COPA flight pointed out, almost simultaneously, the sighting of three unidentified objects seen by pilots and those at the control post located 380 kilometers east of Antofagasta.

CEIFAC – Center for Anomalous Phenomena Research of Chile – published a video with the aviators’ recordings. Due to the objects’ movements, one of the flights had to detour some 20 miles off its course to insure passenger safety.

The pilots’ voices say it all.

COPA 174: We have lights on the left and one is fading away. Affirmative, it appears to be at our same altitude. It wasn’t at Livor, because the lights are there. No traffic is reported and we don’t know what it is. One light just disappeared, there’s only one left.

LAN 639: Santiago, Lan Chile 639 ¿Could you indicate the identification of the traffic ahead of us?

ATC (Air Traffic Controller): The traffic ahead is Lan Per 2473

LAN 639: Position downward. Apparently over the sea. Could you also identify another light?

LAN 2473: Look sharp. We have another light in view, approximately at our 4 o’clock. Where there were two [lights] there’s now only one.

LAN 79: Affirmative. I can see it clearly, a little more to the south of (…) at sea level. A very small light, appearing and disappearing.

COPA 174: Copa 174 to Livor, 340 and we now have 3 lights. We are to the right of Livor 340 and the lights are to our left, approximately at our 10 o’clock. Lights are moving and increasing and diminishing intensity. In fact, we’re turning right as they appear to be approaching.

After these initial events, the control tower decided to contact the Oceanic Air Traffic Controller, in charge of ascertaining the traffic of craft flying over the sea, beyond the reach of ground based radar.

ATC: You have a note there with UFOs in the Livor block. Oceanic

Minutes later, other flights would witness the same three lights.

COPA 174: What an odd phenomenon. Now we have 3 lights shaped like a triangle.

LAN 501: Affirmative, we have them now almost a 3 o’clock. One’s brighter than the other, and they are two lights.

The control tower chose to advise another aeronautical authority of these events.

ATC: Good morning sir. This is the Oceanic Control Center in Santiago.

ATC: Good morning, there’s a rather strange situation in the Livor sector. There are some 5 or 6 aircraft in the Live for Lima 780 air corridor reporting a movement of lights. Two, four, up to four lights in that sector, to the east. To the west of the Livor sector, at their own level or lower. The situation is ongoing. Three aircraft have reported it. In fact, an aircraft detoured 20 miles to avoid them. Altitude is approximately thirty two thousand. Now there are two traffic coming along the same corridor from the United States and are flying over the sector. They also have them in sight at 2 or 3 o’clock, over the sea.

COA: In the Livor sector?

ATC: Of course, and there is no traffic. We have our own traffic controlled. But we cannot see the lights maneuvering there on radar.
The phenomenon continued for about half an hour. ATC made the decision to advise COA “to avoid any situations.”

LAN CHILE 501: We have lights at our 4 o’clock at that position.

According to CEIFAC, one of the first hypotheses put forth for the event was that the lights belonged to seagoing vessels in the area “arising from changes in air density that created a light refraction, causing the optical illusion of being over the sea.”

However, the organization dismissed this given that the lights, theoretically, appeared to move intelligently and form a triangle. Furthermore, had it been a consequence of light refraction, the reflection would have been still.

* Translation © 2018 S. Corrales, IHU with thanks to Guillermo Giménez and La Semana