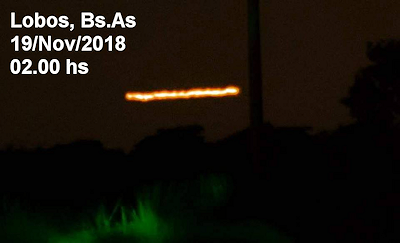 airspace over Buenos Aires was fenced off due to the G20 Summit. We can add to this the daylight sighting of a very strange artifact over Coronel Vidal at noon on Friday, November 16, and two reports of “transparent” triangular craft at Ramos Mejía and City Bell on previous evenings.

The sighting that took place on Monday, November 19 was around 02:00 at the Lobos Lagoon, some 2 km distant. A circular, luminous object, flying from north to south, flew slowly over the trees until it vanished. It looked yellow in plain sight and no particular sound was heard. From where we stood it looked rather low, on the horizon, slightly above the treetops. There are no airports nearby. We could record it with the cellphone and take a photo with a 10 second exposure (Info courtesy of Marina Rabino and Maury González). 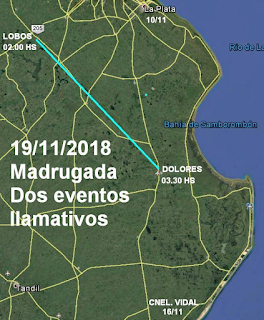 At 03:30 hours on Monday, November 19, during the course of a nocturnal skywatch, I was able to see to my astonishment five objects forming a perfect triangle, flying in a Southeast-Northeast heading. I tried to record them with my cellphone but was unable to do so. A few minutes later, I saw a similar object but this time with three lights, also forming a precise triangle, but flying in a direction opposite to the first. I continued looking at the sky and was able to see an object with highly distinctive characteristics flying from South to North. It was clearly visible on account of its low altitude, spherical shape, and it seemed to rotate to me while it changed color form blinding white to amber yellow, blue and red. I reported this to the group on WhatsApp to see if you could see it in the La Plata or Punta Indio region, as this was the trajectory it was following. (Info courtesy of Julio Gómez).