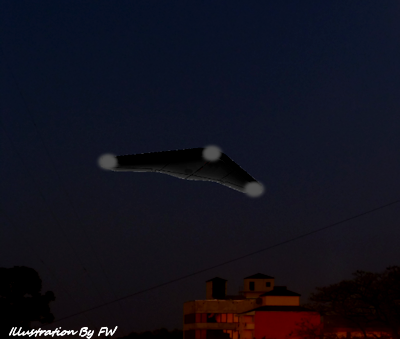 In this instance, the witnesses were two sisters surnamed Alvarez, ages 13 and 17 respectively. They were in the backyard of their home in San Antonio de Padua, between the Morón and Merlo air bases. At 22:30 hours last Friday, 14 December, they were startled by the sight of a “TRIANGULAR object, with grey-colored tips on its vertexes, but not illuminated.” The mysterious object flew in a Northwest-Southwest direction without making any noise whatsoever. It was flying at standard speed and at a significant elevation, meaning that its size must have been considerable. They discussed it immediately with their father, who contacted us several hours later.