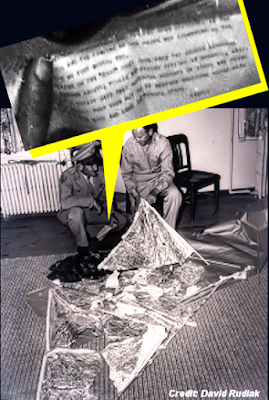 From the beginning, those two phrases have been discussed at length. Both emerged from the start of the search for meaning. Another interpretation appeared just a couple of years ago, “viewing of the wreck,” which didn’t tell us much, other than the solution was probably based on Earth. Again, it was just beyond our ability to resolve the words on the memo.

Back a couple of years ago, a new, high power scan of the negative of Ramey holding the memo was made. The idea was to use the latest technology to attempt to read the new and improved scan. Universal acceptance was just out of reach. The critical line could not be resolved to the point where the majority of those interested in it would agree on an interpretation.

Josh Gates, and those at Expedition Unknown took a another look at it in 2017. The results by an independent expert suggested that “viewing” was the critical word, rather than “victims.” Viewing was seven letters and it made sense in the context of the rest of the sentence, but it just wasn’t the slam dunk needed. 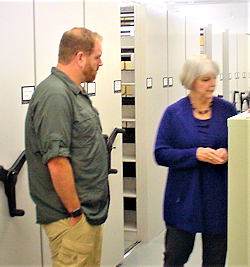 Research continued, with several experts from around the world attempting to decipher the word and the sentence. Now, a fellow who wishes only to be known as Kaleb, used SmartDeblur 2.3 PRO version (trial edition) to enhance these scans.
He has shared the images with very few people and cautions, “No one else has seen them as of yet, but I am sure they are big enough and strong enough to make a few waves in the UFOlogy community?”
But to be fair, I can see both “victims” and “remains” in these new images. And, one of those who worked with us completing the new scans, and who, I believe has no dog in the fight, wrote:

At the risk of being redundant, Mr. Kaleb is getting farther away with each iteration. The process he’s using is inherently destructive and his “new” images are beginning to take on the appearance of written Sanskrit. Until such time that the images provided … are subjected to a substitution and comparison algorithm using computers on the order of those provided to NSA the odds of the memo being any more clear and readable are slim and none. The Texas University images clearly show sharp and perfectly clear grain image. There is no “de-bluring” or “enhancement” to be gained to those files by imaging software of any design. The very nature of such software destroys far more than it reveals. Were the images to be subjected to a crypto analysis type program similar to that of the proverbial hundred monkeys pounding away on typewriters and eventually writing the complete works of Shakespeare…well, you get the idea.

Another assessment, from another of those involved in this problem, provides a little more information. It said:

… assessment I think is fair in terms of our work producing a cleaner ‘base image’ than previously available and that re-enhancing those images is going backwards.
But I do believe an approach to correct the topography of the memo (angle; orientation; perspective fall-off etc) would yield improvements which Kaleb’s efforts hint at.
If Kaleb (or others) could manipulate the memo without falling prey to destructive image enhancements – … informed concerns could be address and the work taken in a more fruitful direction.

While it might be said that progress is being made, and that any suggestion and attempt at reading the memo provides some insight into what was happening in 1947, it can also be said that we’re basically at the same place. There are two interpretations of the memo. One suggests something alien and the other suggests something terran (yeah, I used a science fiction term for those of us from Earth… I don’t like earthling).
As for me, I’m a little disappointed that we haven’t made better progress. I had hoped that our new technologies and new technics would enable us to make a better run at this. For those still engaged in the work, I have nothing but respect. The work continues, and I’ll report the findings as soon as I have them.