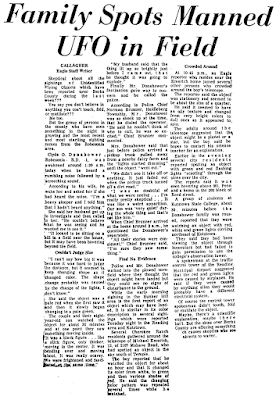 According to his wife … her husband got up to investigate and then called to her. “He couldn’t believe what he was seeing and he wanted me to see it.”

“It looked to be sitting on a hill in a field near the house, but it may have been hovering beyond the field.”

“I can’t say how big it was because it was hard to judge the distance, but it seemed to keep changing shape as it changed color. The shape change probably was caused by the change of the lights, I don’t know.

She said the object was a pale red when she first saw it and then it slowly began changing to a pale green.

The couple and their eight-year-old son watched the object for about 20 minutes and at one point they saw something moving inside.

“It was a black figure … like a stick figure, only thicker moving in the center. It was bending over and moving about. It was really scary. We were frightened and fascinated at the same time.”