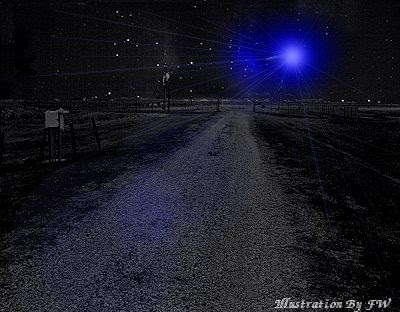 Based on Woods’ conscious recall, as well as memories secured under hypnosis, the pair were removed from their security vehicle, then taken aboard the hovering craft and physically examined by their abductors. Afterward, they were transported to a location some five miles from the missile site, together with their truck. Eventually, other Air Force security personnel located the men and accompanied them back to the base for interrogation. Although Woods was unaware of it at the time, he and his partner had been missing for four hours.

The next day, at the base hospital, skin samples were taken from Woods’ face, above his right eyebrow and from the back of his right hand. At both sites, the skin appeared sunburned. Further, two identical circular scars were discovered on his body, one below his left armpit and the other on his left ankle.

I possess Woods’ DD214 service record, which confirms his Security Police position at Ellsworth AFB in 1977. Having communicated with him on several occasions over the past 18 months, and having reviewed the video of his October 2017 hypnosis session, my opinion is that he is telling the truth about his experience. Efforts are currently underway to locate his former security partner.

As mentioned earlier, a handful of other Air Force veterans have now come forward and discussed their own abduction encounters, either while on-the-job or at home. The most well-known is former Captain Bob Salas, the ICBM launch officer who’s Minuteman ICBMs dropped offline just as a UFO hovered over their launch control facility, at Malmstrom AFB, Montana, in March 1967.

Another veteran, a retired Minuteman maintenance technician, whom I will publicly identify in the near future, has told me of suddenly awakening at his home near Malmstrom one night in 1996, only to find his bedroom filled with brilliant blue light. Seconds later, a short non-human entity approached the foot of his bed, at which point the technician became paralyzed. Down the hall, in another bedroom, his roommate—another missile maintenance man—was heard yelling loudly before suddenly becoming silent. The next thing my source knew, it was morning. At breakfast, comparing notes, his roommate confirmed being awoken by an intense blue light but apparently did not see the entity. However, he too had become paralyzed and apparently lost consciousness.

Three other USAF veterans have spoken to me about experiencing similar abduction-like encounters which I will summarize in a new book I am currently writing. In my opinion, these reports suggest a pattern of activity involving a small percentage of military personnel who have had a UFO sighting at a nuclear missile site, who have also been singled-out, sometimes years later, for a face-to-face interaction with the entities who presumably pilot the mysterious aerial craft.

Although the skeptics will scoff, as they always do, I think this finding is significant and requires exhaustive investigation. Consequently, I am asking any military veteran who operated or guarded nuclear weapons—who also had an on-the-job UFO sighting and concurrent or subsequent abduction-like experience—to contact me. While I would prefer to openly discuss any information revealed, I will keep our discussion confidential unless I am given permission to publish it. Be prepared to provide me with your DD214 forms.