On March 6 to 7 the Moon crossed between NASA’s Solar Dynamics Observatory and the Sun, a phenomenon called a lunar transit. 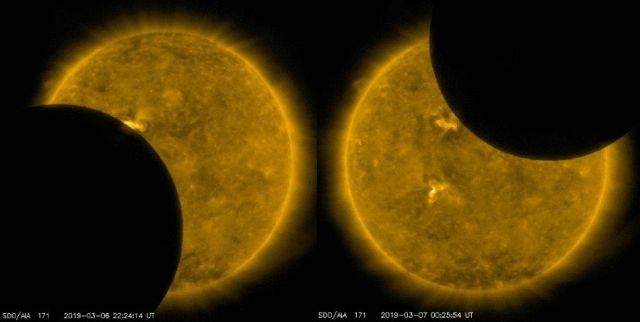 NASA’s Solar Dynamics Observatory (SDO) observed an eclipse of the sun–a strange kind of eclipse that you can only see while orbiting Earth. The black disk of the New Moon passed in front of the sun, reversed course, and did it again.

During the eclipse, which lasted just over 4 hours, as much as 82% of the sun was covered. Technically, that makes it an annular solar eclipse, not total. At maximum, an annulus or “ring of fire” completely surrounded the Moon.

According to spaceweather the strange “double-dip” motion of the Moon across the sun is a result of orbital mechanics.

Both SDO and the Moon are orbiting Earth, but at different speeds. SDO’s velocity of ~3 km/s is faster than the Moon’s velocity of 1 km/s. SDO thus overtakes the Moon first in one direction, then the other, during the long eclipse.