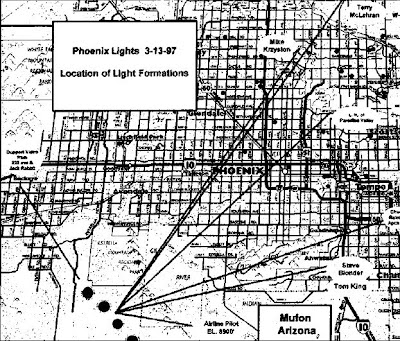 The real time line for this event is somewhere around 8:00 p.m. MST. As the calls kept flowing in, the description changed as to how many lights were involved. Some even said there were no lights at all, but they could see a black mass blocking out the stars as it passed between the viewer and the sky. The general description was of a “V,” but it also resembled a crown with lights that formed an upward triangle. These lights were not like aircraft landing lights but more like stars. This description would change as the objects moved into the Phoenix area. The only consistent properties of the object(s) would be that there were no sound and very slow movement. However, if there was only one object, it could not have covered that distance in such a short time. This is a real “Catch-22,” but may be the key to the solution. I know of three V formations that night and there may be more.

As the readers may know, all of this was broadcast worldwide at 11:00 PST on Art Bell’s Coast-to-Coast talk radio program. I knew it would be a very busy day for me the next morning, so I retired. I was involved with the videos of this event even before it happened. I received a call from Tom Taylor, our state director for MUFON, that a person in Paradise Valley had been taping lights west of the TV towers on South Mountain for over two years, suggesting that I make contact with her to view the footage. I did so and set the next Wednesday, the 12th at 9:00 a.m., for her to come to my home to view the tapes. Due to the death of Mr. Taylor’s mother, I changed the meeting date to the 14th, Friday, the day after the events of the 13th. While talking to her on the phone, I discussed the idea that she might be seeing flares from the Gila Bend Gunnery Range. She felt this was not the case, so we met Friday around 10:15 a.m. Even before her arrival, the news media were at my house getting my reaction to the events of the night before. I had only seen one video, the formation shot by Chuck Rairden from Apache Junction. I told them that in a few minutes I would have a second video for all of us to see, because this lady had caught the event, too. The news programs broke the story with their 4:30 p.m. edition. From that time on, the phones never stopped ringing and the news people kept coming.