This video and audio illustrates a seismic event detected by NASA’s InSight on April 6, 2019, the 128th Martian day, or sol, of the mission. 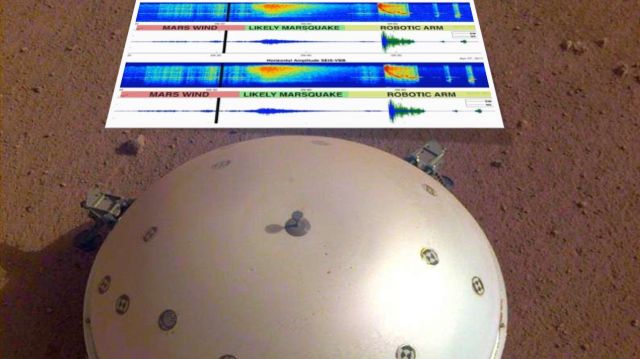 Three distinct kinds of sounds can be heard, all of them detected as ground vibrations by the spacecraft’s seismometer, called the Seismic Experiment for Interior Structure (SEIS):

There’s noise from Martian wind; the seismic event itself; and the spacecraft’s robotic arm as it moves to take pictures.

This event is the first likely Marsquake recorded by the InSight team. Several other seismic events have been recorded but are much more ambiguous than this signal.

The audio underscores just how seismically noisy the Martian surface can be and was produced from two sets of sensors included with SEIS.

Listen to the ‘Marsquake’ that sounds like a high-speed train as used in an underground rail system. Playback on headphones or speaker system recommended for best experience.