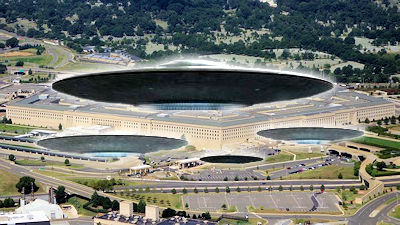 For those who are unfamiliar; Mr. Luis Elizondo has been profiled as the former director of the Advanced Aerospace Threat Identification Program (AATIP) – the US government’s “secret UFO research program.” Now, for the first time since the New York Times and Politico broke this story in December of 2017, The Pentagon has called into question what role, if any, Mr. Elizondo had with AATIP.

Mr. Elizondo is a former member of our intelligence community, and as I have said many times before, he should be commended for his service. However, he should still be questioned, as he even said himself. He has EARNED his right to respond to The Pentagon and prove that their statement is untrue. Mr. Kloor and The Intercept, according to their article, gave him multiple opportunities to do so, and he chose not to respond (along with other personnel from To the Stars Academy of Arts & Science [TTSA]).

Since The Intercept’s article posted, the internet has gone into a frenzy. The line that separated supporters of Mr. Elizondo and those that questioned his story, has now been further dug deep into the sand. Some thought it was clear vindication for doubting his claims; while others instantly turned Mr. Elizondo into a martyr.

When I first set out to find the truth behind the claims made by Mr. Elizondo, I questioned his story, but not the man. I had assumed that part was already done. As The Intercept accurately portrayed, I was very excited to learn about this story, and was not an instant skeptic. However, as time went on, yes, I became known as a someone who had tough questions that clearly, Mr. Elizondo still does not want to address.

Some equated questioning as me making definitive statements or trying to attack Mr. Elizondo’s honor, integrity or character. It was not. Some equated those questions as me working within a secret cabal, in cahoots with The Pentagon, and our lone intent was to take down Mr. Elizondo. That, too, is not true. My intent with more than twenty-two years running The Black Vault, is the truth. No spin, no agenda, no personal politics injected, no nothing. When I post the documents; they are the documents being posted. We all, myself included, can choose to make opinions thereafter.

However, those unanswered questions that remain, arguably just became much more obvious on why they remain. The “Navigating the Twisted Maze of the AATIP Timeline” I created, includes just a small portion of the discrepancies to this saga. Conflicting dates; confusing origins; questionable funding; all are included in the incredibly important minutia of this story – something some “researchers” want you to ignore.

I have been saying for some time, these details need to be ironed out, especially before we run front page stories or create a series on networks like The History Channel. The cart got well before the horse on this story from the onset, and now, we may be seeing the repercussions of that.

I have made it my life’s mission to uncover details about government secrets, lies, deceit and deception by the U.S. government and military, that has spanned the last century. However, I would be foolish to think that it is only the entities of the U.S. government and military, that can hold secrets or spew lies, deceit and deception. I’ve been around the UFO field of research long enough to know that the number of lies by the feds that I can prove by legal means, arguably are dwarfed by the number of lies that have come from everyday individuals and former government employees injecting themselves into their own UFO-related legacy. Not to steal a line from the X-Files, but, “Trust no one, Mr. Mulder.”

That’s a mantra I have adopted, and I will continue to do so. This entire ordeal has lost me many friends, along with visitors who say they will no longer visit The Black Vault because I have brought up discoveries, discrepancies and questions relating to this story. For that, I will forever be sorry that my friendship did not mean more to those that I lost, and it could be so easily diminished with a difference of opinion. I will also forever be sorry for those who feel that asking questions somehow equates to an evil, sinister agenda, out to get someone so they never return to my free site. I am sorry for all of that.

But I regret absolutely nothing.

I want the truth – and nothing but.

The attackers slinging their mud my direction consist of those who have supported TTSA from the beginning. The same names that I have seen attack me for more than a year, now appear on Mr. Kloor’s twitter feed slinging their mud his direction. The same people that happily display selfies with Mr. Elizondo on their Facebook walls, are the ones leading the charge against me, Mr. Kloor, and whomever else is posting the link to The Intercept. Yet, as of the writing of this statement, there is no Mr. Elizondo. There is no TTSA. There is no evidence to prove Mr. Kloor, well scratch that, that the Pentagon, is wrong. Just the same names, the same bloggers, the same selfie-takers, and the same super-fans. All shocked that quite possibly, the mainstream media in the beginning days, may have been wrong. Although that may be shocking to some that it may be a possibility; that does not make it untrue.

According to those who still back Mr. Elizondo, and claim Mr. Kloor’s article was a “hit piece,” they are relying on only two pieces of evidence:

1). A single statement, given by a former Pentagon spokesperson, that only one journalist (out of the hundreds that did stories in December of 2017) can verify. The spokesperson who allegedly gave the statement, Dana White, is the same one who was under investigation by the Inspector General’s office for misconduct of her employees and she left her post in January of 2019 amid the scandal. The journalist who published that quote and is single handedly the only one who currently verifies it – happens to be making multiple appearances on the new History channel show Unidentified, starring, Mr. Elizondo. That journalist is Mr. Bryan Bender from Politico, one of the first journalists to cover the story on December 16, 2017. Please note: the aforementioned is not an accusation, but rather an observation.

Hundreds of journalists around the globe covered this story in the beginning weeks of it breaking – not one that I am aware of got the same statement. Those that did receive statements, all matched exactly to each other, and none of them confirmed Mr. Elizondo headed the AATIP program. The Pentagon has always maintained that he was a DOD employee, but they refused to comment further about his role (if any) until now.

2). The only other piece of evidence is an alleged “leaked” letter, dated June 24, 2009, wherein Senator Harry Reid requested Special Access Program (SAP) status for AATIP. There is no provenance of this letter. The redactions were applied by investigative journalist George Knapp, who strangely, chose to (or was instructed to) redact Mr. Elizondo’s name prior to originally publishing in June 2018. Despite that bizarre choice, Mr. Knapp says on his social media, in light of this new Pentagon statement, Mr. Elizondo’s name is in “position #10” and has released that portion of the letter that he had previously redacted. Beyond the question of why Mr. Knapp would even redact Mr. Elizondo’s name in the first place, the fact remains that the letter is from June 24, 2009, which pre-dates Mr. Elizondo’s claim of heading the program, by at least 5+ months. (See TTSA official statement) So in other words, the appearance of his name, with the date of the letter, does not address the Pentagon’s statement or the indication Mr. Elizondo did not direct the AATIP program.

Really consider this for a moment. Reverse the situation. If Mr. Kloor wrote an article, based on a single statement that only he could verify, which came from a former spokesperson who left amid scandal, and then Mr. Kloor only displayed one leaked document with no provenance, and he hinged his entire story on that – he would be chastised and likely never get a story published, let alone have his story taken seriously by anyone.

Yet, that isn’t the case. Rather, that hypothetical is Mr. Elizondo’s current defense, by only those loudest supporters going to bat for him on social media.

Mr. Kloor hinged his article on an official Pentagon statement, which was backed by the “OUSDI leadership.” Also, according to the Pentagon, some of that leadership was “still there” from the days Mr. Elizondo was, so therefore, they would have first-hand knowledge about his involvement, if any.

That’s a powerful revelation – and if it is a lie – I look forward to corroborating evidence soon to come to light. In fact, I have said and offered to ALL parties involved, if that verifiable evidence presents itself, I will even help disseminate it to clear Mr. Elizondo’s name. That offer has been ignored by all parties.

But despite what I want, this fight has risen above all of us. This debate is beyond you, me, Mr. Kloor, The Intercept, the NY Times, Mr. Knapp, Ms. Leslie Kean, the internet trolls and whomever else. It’s above EVERYONE except Mr. Elizondo and his former employer.

More than all the above, NOTHING, and I mean NOTHING, should take away from a seemingly new environment where military pilots and personnel are coming forward with their experiences and encounters. NOTHING should take away from their bravery stepping forward, offering an honest recount of what happened to them. I hope, wholeheartedly, that this entire mess that we have before us does not diminish their stories or put an insurmountable obstacle in front of them and a press podium.

But until something irrefutable presents itself, I will remain on the same course I have been for well more than two decades… the truth. If that ends up me being shunned from a community that claims they want the “truth,” although I will be incredibly let down it came to that, so be it. I believe strongly that the truth can survive aggressive scrutiny; while everything else, can not. It’s the latter I have always sought to expose, no matter the cost of the questions that needed to be asked and answered.

I am in this research field not to be popular; but to be accurate. My mind is rarely made up on any topic, and that includes this one, despite what you may have read from internet trolls on various social networks. I am, and will always be open, to official Pentagon statements being wrong. But in order to definitively say that, we need actual evidence, and as you have sat down to read this — there currently is none that anyone has offered.

I’ll see you all at the finish line – wherever and whenever that may be.