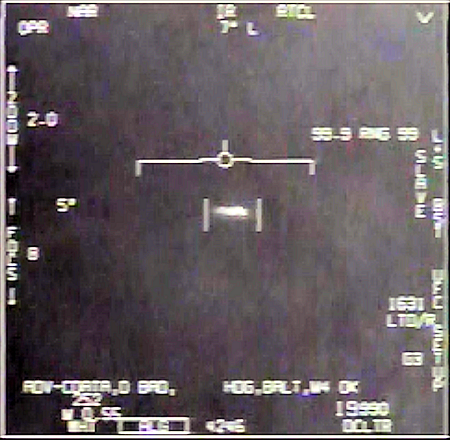 In search of the hidden hand

OK, to whoever’s running the show, riddle me this: Why does your script resume after each commercial buzzkill with a summary of what we saw just three minutes ago? This is not a model of efficiency. Can we skip the micro-rehash, please, we’re not all ADHD or Alzheimers (yet). And if you’re using “Unidentified” as a social experiment, clue us in: How, exactly, do you want us to think? We’ll go there, just tell us. You’ve already played your Black Aces, and you’re definitely holding our attention. In less than two years, you’ve given us certified Defense Department videos of F-18s chasing UFOs, pursuit-pilot testimony, on-the-record assessments by former Deputy Assistant Secretary of Defense for Intelligence, Chris Mellon, plus a couple of independent video experts struggling for analogies. You’ve spoiled us so rotten, we’re impatient and ungrateful.

But guess what? You’ve had a clumsy product rollout, and you can’t control everything. What happens next is contingent upon media competence. And what’s happening journalistically lately is unprecedented, and atypical. There’s no guarantee it’ll last. And there’s plenty of erratic, lazy, formula-driven, obstructionist dreck waiting to fill the lapses. Which means we can’t stop calling that stuff out. Just for the hell of it, let’s start with space.com – clearly one of the most slammin’ domain names of all time.

Something with an audacious flag like space.com should not only own news from the high frontier, that ownership should be creative and oracular. (De Void is glad De Void’s name isn’t space.com.) But just look at what space.com does when it tries to keep up with a conversation instigated by the likes of Politico, the NY Times, and the Washington Post. Space.com decides to interview – yup, yup, bingo – Seth Shostak. Good god — not again. Look, if space.com wanted to justify their headline “UFOs Are Real, But Don’t Assume They’re Alien Spaceships,” they had a much more credible path to that hypothesis. They could’ve consulted with, oh, say, Tyler Rogoway.

Last week, Rogoway and co-author Joseph Trevithick took a detailed look at the operational parallels between what happened with USS Nimitz aviators in 2004 and USS Roosevelt pilots in 2014-15.

Both strike groups, a decade apart, were conducting their first exercises after undergoing, by orders of magnitude, major systems upgrades, including radar and surveillance overhauls. And both training runs produced video footage of UFOs acquired through new state-of-the-art detection technology. Trevithick and Rogoway make a not-implausible argument that the UFOs might have been, in both cases, military assets deployed to give the new configurations a rigorous workout. The authors aren’t saying that’s what happened. But given The War Zone’s dispassionate track record for reporting on UFO activity using FAA records, its journalism doesn’t appear to be promoting an agenda.

Anyhow, space.com could’ve used that sort of sourcing to blow off the phenomenon. Instead, space.com dusted off tired reliable old Seth Shostak again. Probably on speed dial. And it isn’t fair, not to readers or to the SETI Institute’s Most Famous Radioastronomer. It just makes him look bad at this point; Shostak knows nothing about The Great Taboo, and he isn’t interested in knowing. But space.com knows that. Maybe they’re tired, too.

Shostak wouldn’t flinch or say “Ow!” if a UFO took a wet towel and popped a stinging welt on his fanny. He’d say something like “That’s a good policy. Let them do it.” No kidding, that’s what he told space.com last week when asked about the Navy’s frankly astonishing public announcement to encourage pilots to report “unexplained aerial phenomena,” without making them fret about career repercussions. Shostak didn’t say hmm, that’s interesting, wonder what’s behind all that? Just That’s a good policy. Let them do it

Sorry, space.com, that kind of “reporting” won’t cut it anymore, at least not in this new competitive media environment. And for all of Tucker Carlson’s evolving tenacity on this UAP story, and despite Brian Kilmeade’s creditable interview with former DoD honcho Chris Mellon, Fox News’ apparent designs on leading the network pack on this issue won’t amount to much, either, if they keep cut ‘n’ pasting junk stories like the aforementioned space.com snoozer on their website.

If only parroting sloppy work were the biggest challenge going forward. The worst will come from the dead-enders, whose clawbacks will grow increasingly desperate as whoever’s running the show lays down more cards. To wit: the most talked about piece in the aftermath of “Unidentified’s” premiere last week was published in The Intercept by freelancer Keith Kloor.

OK, I’m slow, I’ll admit it, but I really hadn’t heard of Keith Kloor until April. That’s when, writing for the National Academy of Sciences’ quarterly journal “Issues in Science and Technology,” Kloor dispensed with the finesse.

Working with the Scientific Coalition for UAP Studies, Kloor had exclusive dibs on breaking the results of the first technical analysis of the ’04 Nimitz/Tic Tac incident. Lots of sound bites cluttered the airwaves on the Nimitz affair, but until SCU assembled an impressive team of volunteer investigators to work the images for math and physics, anything less was just talk. Kloor used his prestigious NAS connections to gain access, and SCU in turn timed the release of its report to coincide with the publication of Kloor’s article. Huge mistake.

In an article referring to the SCU crowd as “a community of believers in extraterrestrial visitations,” Kloor never addressed the actual contents of the report; instead, he used the occasion to divert the increasingly focused UFO debate onto an exhausted trope — the latest chapter in America’s mental dysfunctionality. Perhaps because Kloor ignored his own scoop and wadded it up into something all too familiar, media competitors never bothered to look at what SCU produced.

Kloor struck again last Saturday, when he went after Luis Elizondo, the controversial former intelligence operator and catalyst behind the release of the F-18 UFO vids. Kloor’s line of inquiry was reasonable enough. The To The Stars Academy, which Elizondo joined in 2017 after resigning from the military, has the sort of serious transparency issues that SCU does not. In efforts to understand Elizondo’s role in the $22 million Advanced Aerospace Threat Identification Program first reported by the NY Times in 2017, Kloor reached a Pentagon spokesperson who cast Elizondo as a phony.

“Mr. Elizondo had no responsibilities with regard to the AATIP program while he worked in (the Office of Under Secretary of Defense for Intelligence), up until the time he resigned effective 10/4/2017,” stated DoD’s Christopher Sherwood. As Kloor pointed out, Sherwood’s disclaimer refuted Elizondo’s assertion that he ran AATIP. Thus, Kloor — nobody’s fool — was quick to charge that Elizondo, and TTSA colleague Mellon, have been manipulating “a largely passive and credulous press to generate sensational UFO headlines” over the past 18 months.

Ignoring Navy veterans’ eyewitness testimony as well as 270 pages of SCU analysis that he failed to report on two months ago, Kloor dismissed the UFO imagery as “grainy footage of tiny, darting objects.” Seriously, that’s the entire sum of Kloor’s assessment of 270 pages of science. Oh, and he said the videos “made for great television.”

De Void started Googling the guy and discovered a Whac-A-Mole whose UFO snark has also lately been popping up in the likes of Slate, Newsweek, and the maybe irrelevant online platform Medium.

Four months ago, in yet another long-winded eulogy for common sense titled “America’s Enduring Obsession With UFOs,” Kloor lamented the MSM’s new “wide-eyed coverage” of “crusading actors” pushing “extraterrestrial enchantment” which “until recently … had largely been relegated to the tabloids and fringe outlets.” Sounding nostalgic for simpler times and suspiciously like Seth Shostak in his refusal to confront hard data, Kloor figured it all out. “I argue it’s the news media,” he proclaimed, “that keeps the specter of extraterrestrials alight in our skies and minds.”

De Void would argue that inept media coverage is what kept The Great Taboo on the fringe for so long. But this is Kloor’s show, and he wants us to bundle everything we know about the Navy’s recorded UFO incidents into whether or not Elizondo misrepresented his duties. Elizondo’s credibility is not a tangential matter. But implicit in the assumption that he lied is Kloor’s own credulity. Maybe he’s getting played as well. Would a government flack ever try to bamboozle anybody? Maybe Christopher Sherwood is really Sarah Huckabee Sanders. I mean, who’s to say?

One last thing about the article. Kloor wrote Elizondo had “a pug face and billy-goat beard” — and he complained that Elizondo won’t call him back.

But here’s all you need to know: The genie that neither Kloor nor anyone else can jam back into the bottle is the Pentagon’s DD-1910 form vouching for the authenticity and release of the videos. So what’s really in there? We’ve all seen the footage, but what does it really show? Evidence of military stress tests? Hardware or software glitches? An Achilles heel, maybe? Ours?

SCU’s team analyzed only the Tic Tac footage, and the results about velocity and g-forces were startling. Somebody not connected to the National Academy of Sciences really should put some decent journalism into what the GoFast and the Gimbal vids can tell us. Or maybe whoever’s steering the “Unidentified” project is merely planning to string us along for just five more weeks. Either way, we’ll wait. Obviously.