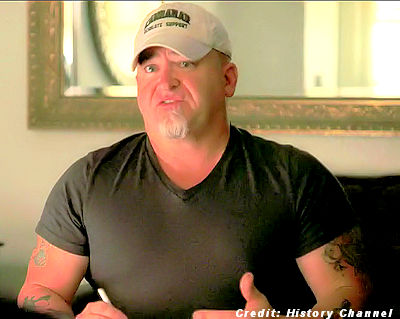 Pentagon spokesperson Susan Gough stated, “I can confirm that the memo you’re referring to is authentic… It makes no change to previous statements. Mr. Elizondo had no assigned responsibilities for AATIP while he was in OUSD(I) [the Office of Under Secretary of Defense for Intelligence].”

Her statement comes amid a firestorm of controversy, when on June 1, 2019, as reported by Mr. Keith Kloor, the Pentagon had also said, in part, “Mr. Elizondo had no responsibilities with regard to the AATIP program while he worked in OUSDI, up until the time he resigned effective 10/4/2017.”

The week following this controversial article by The Intercept, Mr. George Knapp, journalist from KLAS-TV in Las Vegas, Nevada, re-issued a new version of a previously leaked memorandum written by Senator Harry Reid. The document, dated July 24, 2009, previously had the names of Mr. Elizondo, along with another name well-established to have worked within the program, Dr. Hal Puthoff, redacted. The memo outlined Senator Reid’s request and reasoning to get the AATIP a “Special Access Program” or SAP status, and was written to the Deputy Secretary of Defense, William Lynn III. That letter was first published in the July 25, 2018, KLAS-TV story written by Mr. Knapp and Mr. Matt Adams, but It remains unclear why both journalists, or their source, asked them to redact those two names in the first place.

However, there are problems with the letter. Not only does the date precede Mr. Elizondo’s claim by at least five months of heading the AATIP (thus not disproving the Pentagon’s original statement) the Pentagon now confirms that although the letter is genuine; the content therein “makes no change” to their previous statement issued by Pentagon spokesperson Mr. Christopher Sherwood to The Intercept.

“I can confirm that the memo you’re referring to is authentic. DOD received it and responded to Sen. Reid,” Ms. Gough said. She then explains that her office is unable to provide The Black Vault a full copy of the response, since the Public Affairs office does not release Congressional correspondence, but she adds, “It makes no change to previous statements. Mr. Elizondo had no assigned responsibilities for AATIP while he was in OUSD(I). DIA [Defense Intelligence Agency] administered AATIP, and Elizondo was never assigned to DIA. Elizondo did interact with the DIA office managing the program while the program was still ongoing, but he did not lead it.”

Mr. Elizondo did not respond to a request for comment.

This statement, received on June 13, 2019, goes against many claims written online that a “new Pentagon statement” would be forthcoming that would further clarify the Pentagon’s stance, and confirm Mr. Elizondo’s directorship of the program. Most notably, on June 2, 2019, Mr. Bryan Bender, defense editor for Politico who authored one of the main articles breaking the AATIP story in December 2017, tweeted, “I’d stay tuned for a much more definitive statement from the Pentagon this week. The Intercept’s assertions and innuendo (it never definitively reported anything) were wrong. And the issue should be settled once and for all. Though with this crowd I won’t count on it.”

Mr. Bender has since deleted this tweet, some time after it was pointed out the Pentagon statement was not issued the week that he claimed.

Although no correction has been made by the Pentagon as hoped for by some, Dr. Puthoff, co-founder of To The Stars Academy of Arts & Science where Mr. Elizondo is now employed, offered his support to counter the Pentagon’s assertions. When asked for documented proof or any evidence to the contrary, Dr. Puthoff only issued the following statement to The Black Vault:

“I have been following all the buzz back ‘n forth concerning Elizondo’s role in AATIP, and recognize that there are a number of misunderstandings – for reasonable reasons – given that the public doesn’t have detailed access to daily activities in Pentagon projects/offices. Unfortunately for the public, those not directly connected, e.g., in the Public Affairs Office, are often themselves sketchy about details concerning highly-classified sensitive programs for which they have little-to-no access for security reasons. However, I have no problem asserting that as an AAWSAP [Advanced Aerospace Weapon System Applications Program]/AATIP Contractor & Senior Advisor I continued to attend meetings, provide briefings, gain access to videos, provide Proposed Program Plans, meet with staff, etc., all under the aegis of Elizondo’s leadership and responsibility for maintaining continuity of the Program effort and goals until he resigned.”

It is unclear how Dr. Puthoff could have worked under Mr. Elizondo’s leadership, since AAWSAP/AATIP contracted work began in 2008 at DIA and Mr. Elizondo’s alleged leadership began in 2010 at OUSDI when the program was transferred. When asked about the discrepancy, or to clarify that the contracted work by Bigelow Aerospace Advanced Space Studies, LLC. who initially won the contract, continued after two years (or after the 2012 date when funding was cut entirely); Dr. Puthoff did not return the message.