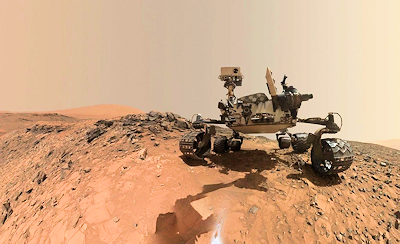 NASA Rover on Mars Detects Puff of Gas
That Hints at Possibility of Life
The Curiosity mission’s scientists picked up the signal
this week, and are seeking additional readings from the red planet.

discovered startlingly high amounts of methane in the Martian air, a gas that on Earth is usually produced by living things. The data arrived back on Earth on Thursday, and by Friday, scientists working on the mission were excitedly discussing the news, which has not yet been announced by NASA.