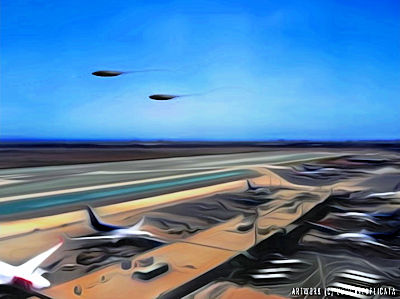 They were described as highly luminous vehicles at a distance of 5 nautical miles and an altitude of 2400 meters, near the Jorge Chavez International Airport, according to confirmation given by the Peruvian Air Force to CNN. However, following publication, the very same official who spoke to the news outlet has denied the truthfulness of that statement.

According to CNN, the presence of these objects was elaborated and reported by commercial flights. The crews of LAN Peru 2437 and Latam Ecuador 1442 identified the UFOs during communications with the control tower. Both aircraft were on the airport runways, ready to take off for their respective destinations.

The incident alert lasted 40 minutes. The Corpac radar recorded the event and documented it, as explained by a Peruvian Air Force official report to which CNN en Español had access.

“The event to which you are referring indeed took place [the presence of UFOs near the Lima airport] and it is necessary to point out that at no time where either civilian or military air operations in jeopardy as a result of their localization and location,” said Baxeiras.

However, Baxeiras told the Peru21 newspaper that he never discussed the UFO sightings.

“We have an anomalous phenomena office. A gentleman from CNN wrote me saying that some reports had been leaked, stating that an air traffic controller had seen a light in the sky, and had reported it on his hand-over sheet. I then replied by mail that yes indeed, when something is seen flying, the FAP is under obligation to investigate it, but at no time did I say UFO,” he said.

Marco A. Barraza, the senior researcher from DIFAA (Departamento de Investigación de Fenómenos Aéreos Anómalos del Perú – Peruvian Anomalous Aerial Phenomena Research Department) advised CNN that contrary to the information disseminated on social media regarding the UFO sightings at the airport, the unidentified flying objects were only in the air terminal’s vicinity.

“The [Jorge Chavez] airport’s airspace is fully monitored, supervised and controlled as far as air operations are concerned. This took place at sea, in the proximity of San Lorenzo Island,” Barraza told CNN en Español.

Barraza explained that the Peruvian Air Force refrained from issuing a communiqué at the time, deeming it unnecessary, as there was no visible threat.

“A series of incidents, objects and events play out in the skies, and these are investigated, but as long as they do not present a threat or hazard to civilian or military operations, they move into ‘another category’,” he said about the case, which is still under investigation.

Baxeiras Vucanovich also told Peru21 that he requested consultation from Marco Barraza in order to better respond to this speculation. “He sent me a reply and I boiled it down to five paragraphs pointing out that yes, something was seen in the sky, but it will be investigated. At no time was it said that it was a UFO. They’ve started this uproar.”

General Baxerias asked that rumors not be allowed to continue, as it was not a UFO but rather “space junk.”

“What was seen could be a kite, one of the many Google balloons (Project Loon), or as we say, trash in the air,” he told Peru21.

Documents with seemingly official terminology and specifics appeared on social media in connection with the two UFOs over Lima. Barraza notes that having not been furnished by authoritative sources, these documents should be considered as spurious information.