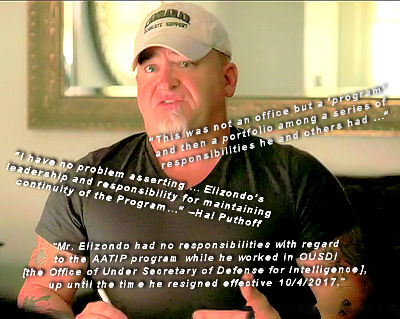 members and former members of the US Navy including fighter pilots. The sighting should stand or fall on its own merits. The controversy around Elizondo has nothing to do with the sighting itself. We judge the sighting on the information we have and don’t discredit it because someone who was not there and had no role in the case, finds himself in wrapped controversy.

Now, we move onto the other part of this. What do we know about Luis Elizondo? Was he one of the leaders of the AATIP program? Or was his name merely on a distribution list? What has been learned?

John Greenewald attempted to answer some of these questions. In the article The Intercept that seems to kick off the controversy, Greenewald reported that Elizondo had no real role in AATIP.

And you can pick up more information on this controversy at Curt Collin’s Blue Burry Lines blog.

The article in The Intercept, as you can see from the first link, was written by Keith Kloor, and said, in essence, that Elizondo “…had no responsibilities with regard to the AATIP program while he worked [in the Office of Under Secretary of Defense for Intelligence], up until the time he resigned.”

Much of this was based on information provided by Greenewald. I will say that I know John, have talked with him on a number of occasions and have used his Black Vault in my research. I find him to be a careful researcher who does not leap to conclusions and doesn’t print anything until he is sure of the information. Greenewald’s suggestions about the accuracy of Elizondo’s job description is quite worrisome.

However, I have also learned that even those with good intentions and careful research methodology can make errors. In looking at this, I reached out to George Knapp. He responded to me quickly, but didn’t provide any useful information to me directly. I suspect now that he had put it all up on Twitter so that he assumed that I would see it there.

That tweet, or series of tweets, did not help. What he provided was a letter from Senator Harry Reid of Nevada that did have Elizondo’s name on an “FY 10 Preliminary Bigoted List of Government Personnel.” Elizondo was listed as a Special Agent, USDI (Gov’t). Interesting, but it doesn’t make Elizondo a leader of AATIP, only that he was on the list of those who knew about the program and had some sort of connection to it.

Harry Reid was interviewed on the radio about all this recently. He told the interviewer that he’d talked with Elizondo many times. He said, “So, I know Elizondo is a real guy. People are out there – a few people are trying to punch holes in what he is saying and what he does, but he was part of the Defense Department, no question about it, and a man of, I think, veracity.”

This doesn’t, however, provide us with any new information about Elizondo’s role in AATIP. It seems to be confirmed that Elizondo had a role in the DoD, and that Reid knew who he is, but that doesn’t make him the chief of ATTIP.

Hal Puthoff, who has hovered around the UFO field for a while and who is now a contractor of some sort with the To The Stars Academy, an organization with which Elizondo is also associated, told John Greenewald, “I have no problem asserting… Elizondo’s leadership and responsibility for maintaining continuity of the Program…”

An article in Politico, written by Bryan Bender, didn’t do much to clear up the controversy. According to Bender “Pentagon spokeswoman Dana White confirmed to POLITICO that the program [AATIP] existed and was run by Elizondo. But she could not say how long he was in charge of it and declined to answer detailed questions about the office or its work…”

Given the nature of classified programs, that really doesn’t surprise me. If the information is classified, then any spokesperson is going to be reluctant to answer questions about it. But she apparently no longer works in that same job, so you have to wonder about the value of her endorsement, which doesn’t really help us.

John Greenewald got into it again, with another posting to his Black Vault website. He contacted Susan Gough, a Pentagon spokesperson. He asked her specifically about Luis Elizondo’s name listed on Reid’s letter. As reported by Greenewald:

“I can confirm that the memo you’re referring to is authentic. DOD received it and responded to Sen. Reid,” Ms. Gough said. She then explains that her office is unable to provide The Black Vault a full copy of the response, since the Public Affairs office does not release Congressional correspondence, but she adds, “It makes no change to previous statements. Mr. Elizondo had no assigned responsibilities for AATIP while he was in OUSD(I). DIA [Defense Intelligence Agency] administered AATIP, and Elizondo was never assigned to DIA. Elizondo did interact with the DIA office managing the program while the program was still ongoing, but he did not lead it.

You can read all of what Greenewald had to say in the article he posted to the Black Vault here.

Everything seems to suggest that Elizondo had some sort of involvement with the program, but that suggesting he was leading it appears to be something of an embellishment. But you have to wonder if there isn’t something else going on here… oh, not about the USS Nimitz and the UFO sighting, but in the promotion of the television show. Having the leader of the AATIP program leading the TV investigation makes it a little more credible. But that only works if the credential can be verified. Does merely having some association with the program, rather than actually leading it reduce the credibility? Or more importantly, does embellishing the role of the lead investigator on the History program diminish that credibility of that program?

The question arises from that. In a world in which so much information is now available to so many of us with so little effort, isn’t it a little reckless to inflate credentials? In the end, if the inflation is discovered, and it will be if it exists, it hurts the overall program and in fact, hides the importance of the USS Nimitz sightings. You almost have to wonder if that wasn’t the whole point.

Again, all this controversy about Elizondo (which could be cleared up in a candid statement) does not detract from the AATIP program nor the sightings by those in the USS Nimitz battle group. They are separate issues. I suppose I’m suggesting that we ignore the trouble about Elizondo until it can be resolved and concentrate on the information from the witnesses and attempt to learn more about the video that has been released. One does not depend on the other and we shouldn’t get caught up in the controversy to the exclusion of investigation of the sighting. Surely, there will be more about that in the weeks to come.

President Trump, a Noted Conspiracy Theorist, is Skeptical of UFOs

“We Know UFOs Exist … Why Are They Here and Where Are They Coming From?” – Former US Defense Official, Chrisopher Mellon

Luis Elizondo: Why Is The Government Finally Admitting UFOs Are Real?