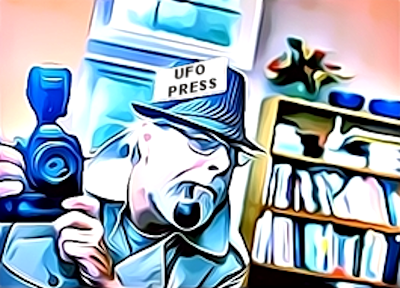 Mainstream journalists took notice. Many of them parroted lines as apparently instructed, while others seemed to grab the story because it involved actual intelligence officials, for whatever reasons. Some journos also seemed curious as to why their colleagues were so easily manipulated and willingly acting as uncritical mouthpieces, in some instances publishing assertions so ill advised they refused to even state sources.

This evolving story is going to keep going for a while yet, and it will be interesting to see how it plays out, and to what extent, in the public at large. A much deeper issue confronts the UFO community: Its popular high profile reporters failed miserably to verify many of the claims they assured us were true, and tried to shore up the stories when select journos began dismantling them. Most importantly of all, it has long been this way and there is more than adequate evidence such UFO reporters have chronically had little interest in accuracy as compared to sensational stories. Everybody knows it, other than the most gullible, and many don’t even care for a variety of reasons.

We’re going to keep coming back to a main point, though: The UFO reporters assured us they could vouch for circumstances that continue to be unverified, and their only excuse is incompetence. Otherwise, we are forced to contemplate how intentionally they were attempting to confuse their followings and mislead the public when they argued in defense of the contents of documents that established no such things as they repeatedly asserted.

The UFO community is ultimately going to have to come to terms with how it accounts for being repeatedly fed unsupported stories by credulous, if not opportunist, reporters and filmmakers, spanning years. Then, when some journalists spend a few short weeks on the UFO reporters’ latest story, they dismantle it to an embarrassing extent. Do we want more of the same? Are we willing to revisit the integrity of the sacred cow stories these same UFO reporters assure us are iconic?

Questions of intelligence and integrity loom. Questions of how the community chooses to define itself loom larger.