A stargazer landed the shot of a lifetime on Wednesday after he captured extremely rare footage of a mysterious flash of light on Jupiter, which may have been an elusive meteor explosion. 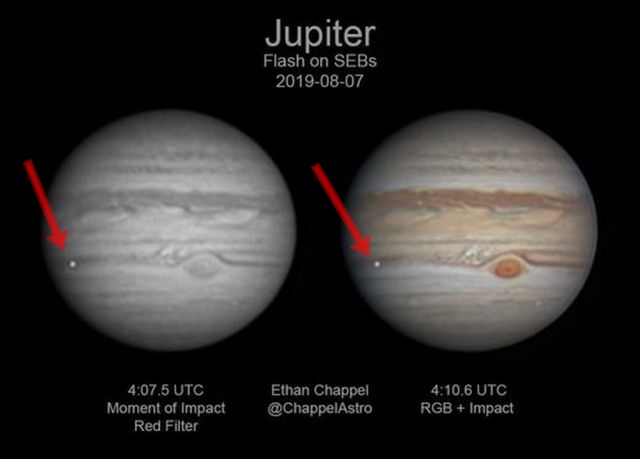 Texas astrophotographer Ethan Chappel captured the incredible sight while he was filming the planet, and said the event on Jupiter’s southern equatorial belt “looks awfully like an impact flash.” A bright spot can be seen appearing out of nowhere before it quickly fades away, reports RT.

“After I checked the video and saw the flash, my mind started racing! I urgently felt the need to share it with people who would find the results useful,” Chappel told ScienceAlert.

Astronomer Jonti Horner said he had “never seen anything like that before,” and described the flash as “just totally breathtaking.”

“A lot of the time these things will go unnoticed and unobserved,” he explained. “Half of them will happen on the far side of the planet. So there’s a lot of things working against seeing these events.”

Imaged Jupiter tonight. Looks awfully like an impact flash in the SEB. Happened on 2019-08-07 at 4:07 UTC. pic.twitter.com/KSis9RZrgP