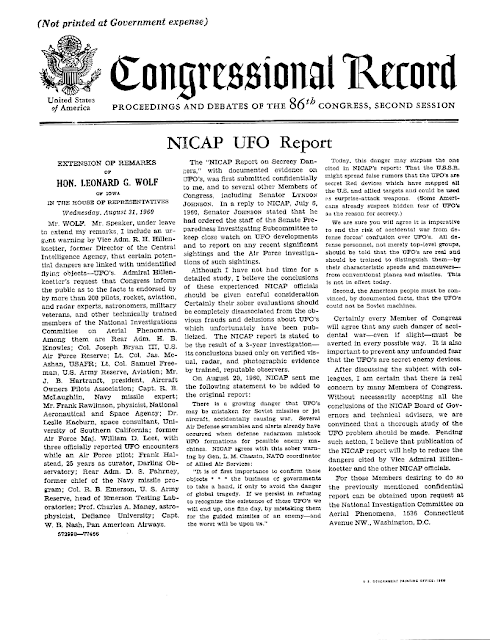 Spencer about the possibility of UFOs representing, hmm, perhaps a Chinese military threat.

A Chinese threat bouncing about in our skies since the 1940s and even prior to that?

Pardon my skepticism, but we’ve seen it all before, every act of this pretentious Vaudeville-Era performance. It starts with congressional outrage or curiosity and ends with either no government action noted publicly and/or press releases assuring one and all that there is no threat to national security. And, oh, um, government folk can wash their hands clean by throwing a few dollars into a Colorado U-style “investigation” designed to make everybody feel enlightened and prone to just go away.

During the early years of this blog — you know, before R. Barrow went insane and began concentrating more on political issues and little teeny-tiny concerns about government people dedicated to diminishing the established rights of every American? — we dealt almost exclusively with the UFO issue and our small part in research and investigations. In those pages are scans of letters from a number of congressmen and senators responding to my queries (going back to the early sixties) about the importance of the UFO issue.

But my inquiries were not unique. Indeed, we now know that government agencies and personnel were taking UFO reports seriously in the forties and fifties. By the time the 1960s arrived, particularly after the 1964 Socorro UFO encounter and later on reports from Michigan, precipitating then-Congressman Gerald Ford of Michigan to demand an investigation, congressional offices were inundated with anxious constituent letters begging for answers.

The point is that Congress was aware long ago that UFOs were real and worthy of scientific examination — a phenomenon so bizarre and apparently posing such an obvious danger to air travel that its very nature demanded a look. If you check out NICAP’s 1964 document, The UFO Evidence, given to EVERY member of Congress (see link to NICAP and click on free books section), there’s a section quoting numerous congressional members going back to the fifties, most of them expressing interest in the evidence. And — so what?

Throughout the decades, it wasn’t a congressional majority or scientific consensus keeping the UFO subject in the spotlight: Proponents familiar with evidence extending all over the world were instead the private research organizations and individuals who knew, despite the skeptics and debunkers, that, indeed, here was an enigma not to be ignored. Sad to say, even the crackpots and book authors who claimed visits to Venus and Mars accompanied by elegant extraterrestrial beings helped keep the issue alive, even as so-called members of the scientific community did little but ridicule UFO witnesses and throw up various roadblocks to serious investigations.

Yet, here we go again, and this time the nameplates read Senator Mark Warner and Congressman Mark Walker. Oh well, at least they share the same initials and each is named Mark, making it easier to remember their, perhaps, just momentary visitation to the land of sky conundrums. Deja vu, howdy do?

We hope Congress will someday thank all the fine and talented people (and maybe the crackpots, too, for their interesting lunatic efforts!) who sacrificed decades building an extensive science-based international library of UFO documentation which all may behold and from which all officials should have learned THE FIRST TIME.

Who knows, maybe someday a Ken Burns type will produce a multi-part TV documentary exploring the importance of specific individuals and organizations to the enormity of a mystery whose identity may or may not be right around the corner — a “thank you” of sorts at last to a class of characteristically just-plain-folks whose echoing ghostly retort of You’re welcome, we did our best blowing in the wind will be their only reward.