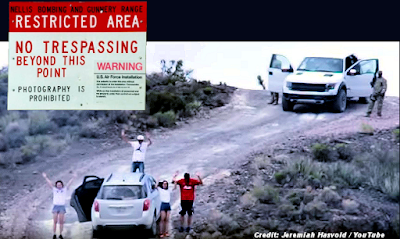 Chasin’ down a hoodoo there …

factoids: Only two people died. One succumbed to an overdose, the other was crushed by a tractor as he lay in a sleeping bag.

This all happened decades before the Internet and social media. But the word got around, and today, because the monster crowds were so peaceful, the rolling pastureland at Bethel, N.Y., is listed in the National Register of Historic Places.

Fast forward to 2019. By now, everybody knows how, late last month, a 20-year-old Bakersfield College student named Matty Roberts started a “Storm Area 51: They Can’t Stop Us All” joke on Facebook. The “Let’s See Them Aliens” scenario encouraged people to dash onto the famously secretive military base, liberate the alleged extraterrestrials being incarcerated there, and escape getting arrested or shot by sprinting like an anime ninja.

Naturally, in this post-ironic age, some 1.9 million people have since “signed up” to attend the ostensibly fictitious September 20 event, and another 1.4 million describe themselves as “interested.” The massive attention directed at America’s sprawling desert complex prompted the Pentagon to remind potential Stormers “The U.S. Air Force always stands ready to protect America and its assets.” Rattled by the snowballing publicity, last week Roberts felt compelled to tell the media – and, by extension, the FBI – that he was just goofing around, please don’t send SWAT teams to bash my door down. But by then, it was too late – Roberts’ brainstorm had swiveled off the lab table and assumed a life of its own.

“Storm Area 51” now shows more than a quarter of a billion-with-a-B results on Google. Downloads include a blizzard of celebrity memes, goofball spinoffs (“Storm Loch Ness”), re-enactments, clever comic sketches, and commentary in languages I don’t understand. Budweiser even designed a new beer can to increase its market share.

Podcaster Jonathan Pageau calls the phenomenon a “mythological representation” of America’s dilemma with real-life aliens. He builds his case on an incident involving an activist who was shot to death outside an Immigration and Customs Enforcement detention center in Washington State a few weeks ago after he tossed objects at nearby buildings and passing cars. But Pageau says the viral nature of “Storm Area 51” reflects an even deeper fascination with secrets, barriers and “breaking down social order to a certain extent” in order to access the truth. “It doesn’t have to be rational – it is presented in this meme and story form,” he says. And “all society can participate in this narrative trope.”

But George Washington law professor Jonathan Turley took to the LA Times to remind readers that Area 51 is not to be trifled with. During the Clinton era, Turley’s representation of government contractors proved how far the feds would go to protect their secrets. In refusing to disclose which carcinogens Turley’s Area 51 plaintiffs had been exposed to during waste-disposal fires conducted in violation of EPA regulations, the feds signaled their willingness to sacrifice the health and lives of their own employees to a mode of secrecy that borders on pathological.

Of course, this raises questions about what sorts of countermeasures base security might employ to neutralize hordes of Stormers hoping to rescue ET. We learned on Monday how the U.S. downed an Iranian drone over the Persian Gulf last week without firing a single projectile – the Marines took it out with a directed pulse weapon. What sorts of unconventional surprises might be in store for the “Let’s See Them Aliens” crowd?

On the other hand, after processing the response to “Storm Area 51,” Matty Roberts started wondering about maybe staging an electronic dance music concert out there somewhere. Never mind that there aren’t sufficient facilities to support such a crowd, and that anyone who drops acid and wanders into the blazing wasteland on a vision quest might turn up in an arroyo with the cow skulls sometime next year. Here’s De Void’s unsolicited advice: Invite the Foo Fighters. This is a no-brainer. If you can book those guys, the way the Woodstock promoters got Creedence Clearwater Revival to be the first to sign the dotted line 50 years ago, everyone else will follow.

De Void isn’t trying to stir up trouble here, but “Storm Area 51” does get me thinking. Some 156 summers ago, De Void had at least two ancestors who did something really foolish. They wound up in a place called Gettysburg, wearing Confederate uniforms. One, 16-year-old Bolin Clifton, was wounded and lost a leg to amputation. The other, 18-year-old Charles Henry Clifton, got his arm blown off and became a POW. These two were mowed down before Pickett’s Incredibly Stupid Charge across an open field changed the course of the Civil War. And they didn’t even die.

Everyone wants to go out in a blaze of glory, or at least under alluring mysterious circumstances. If my obit read something like, “… was last seen running across open desert towards Area 51, never to be heard from again,” surely somebody would write a song about it. Wouldn’t they?