On August 1, 2019 I was fishing with two friends at the Hudson River in the Adirondacks. We thought we were alone, but suddenly there was a large crowd of people in rafts coming down the river as well as a pedal-driven train tour along the railroad tracks.

My friend took a picture of the crowd. We did not see anything unusual at the time, but on looking at one of the pictures later, there is a very strange image in the upper right hand corner. It appears to show a possible ring-shaped object flying over the bridge, with a jet trail or something behind it.

I am a paranormal investigator with the TAPS Family, so my friend sent it to me for my opinion. I was there when it was taken, and I know that it has not been modified in any way.

The only thing I can come up with for a natural explanation is that it could possibly be a water droplet on the lens, just causing a very strange light reflection. 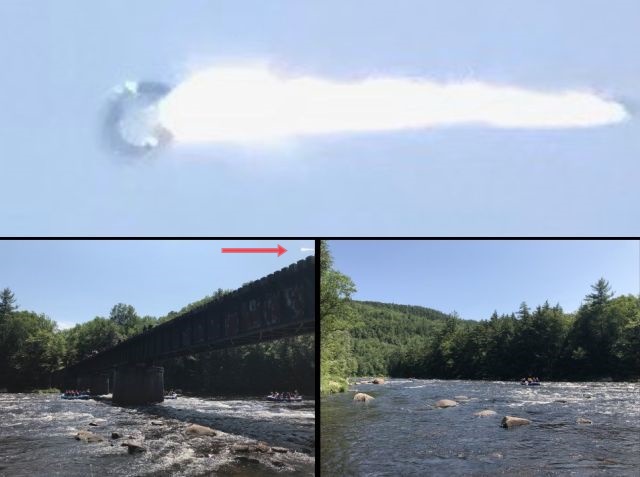 But I thought you guys would have more experience looking at such photos than I so I would be interested in your opinion.

We checked all the other photos taken at the time and there are no other such anomalies. There is no photo taken directly after this one, but one taken right before has nothing on the lens. Mufon case 102827.