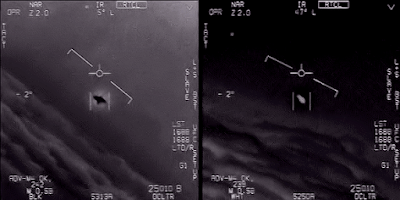 All kidding aside, we have spy satellites that can see a pimple developing on my forehead. I’m kinda guessing the Navy already knows what these so-called UAP’s are.

terminology is used because it provides the basic descriptor for the sightings/observations of unauthorized/unidentified aircraft/objects that have been observed entering/operating in the airspace of various military-controlled training ranges.”

A lot seems to have been read into that statement, much of which, in my opinion, is based on what the reader chooses to see. Interpretations such as “they’re admitting they’re not ours” and “they finally acknowledged they’re UAP” are making the social media rounds.

I understand why UFO enthusiasts are excited. The DoD and the Navy are talking about UFOs – a lot – but the concepts being wishfully attributed to the Navy spokesperson are not what he said, not exactly. In this post let’s consider a few things about this never ending story.

After all, if you can’t trust the Information Warfare Center to catapult us into UFO Disclosure, who can ya trust?

A lot of spooks emerged out of the IC and waded into the UFO pond over the years. Some particular notables include Adm. Roscoe H. Hillenkoetter, who directed the CIA prior to serving on the Board of Governors for the National Investigations Committee on Aerial Phenomena from 1957 to 1962. A fellow NICAP board member was Col. Joseph Bryan III, who, interestingly, was “later discovered to be a former naval officer and CIA employee, psychological warfare specialist,” according to researcher Richard Hall.

DCI Hillenkoetter led to what would be a long line of current and former intelligence professionals moonlighting in ufology. The list includes Gen. Bert Stubblebine, credited with redesigning the intelligence structure of the entire U.S. Army, Col. John “Mr. Non-Lethal” Alexander, Comdr. C.B. “Scott” Jones, who claimed he believed his friend was targeted with a mind control weapon by the FBI, the enigmatic and UFO forum-present Ron Pandolfi, infamous Richard Doty, and many more, including, of course, Luis Elizondo and a number of intriguingly successful members of the IC prior to boarding the TTSA train.

Long before current Information Warfare spokespeople indirectly implied reasons the Navy revised its UFO reporting procedures – somewhat contradicting a DoD explanation the AATIP was axed due to higher priorities more deserving of funds, no less – intel analysts sometimes used the levels of concern of their commanding officers as indicators of how much attention they should give potential threats. That included matters of what, today, we might call UFOs or UAP.

James Carrion documented per declassified memos and reports how the 1946-47 Ghost Rocket flap involved professional analysis in which it was suspected senior officers were, in reasonable likelihood, well aware of the origins of the reported rockets. Numerous reasons were given to that effect by intelligence analysts, as well as an FBI Special Agent in Charge, which included a lack of concern for the rocket reports from the brass. Also observed was a lack of calling personnel back from leave during intense portions of the supposed threat. This curiously happened while the press was simultaneously offered official statements of concern and provided stories pertaining to the rocket sightings.

We might consider the circumstances somewhat comparable to a so-called Pentagon UFO program which was reportedly discontinued, yet select personnel persist in publicly warning us – and an accommodating media – of airspace incursions. At the least, I’d argue it should be taken into consideration.

Most importantly, there is no substitute for verifiable data. Evidence available for public review: that’s the name of the game. Unfortunately, those claiming to be leading Disclosure are much more often than not obstructing the purported evidence. They are long on claims and short on data.

There have been vague and anonymous news reports about taxpayer-funded examinations of UFO witnesses, modified buildings for storage of UFO debris, reports of UFO research projects existing both before and after the AAWSAP and AATIP, and too many more fantastic claims to list, little to none of which has been substantiated. There are discrepancies about who ran the projects, what the projects were empowered to do, if anything of value was learned, if the research was properly approved and overseen by official boards, and it’s not clear how much, if any of it, is even classified or not. Several FOIA requests are pending.

Maybe Disclosure of extraordinary things are on the horizon. I guess ya never know for sure. If not, hey, there’s always that statement about UAP from the Naval Operations for Information Warfare.

‘Compelling Evidence, We Not Be Alone’ Claims Intelligence Official | VIDEO

The Navy Responds in Detail Re The UFO Videos, AATIP, Unknown Technology and More …

The Navy Says Those UFO Videos Are Real