NASA what are you going to say about the entomologist’s proof that there is life on Mars.

As scientists scramble to determine whether there is life on Mars, Ohio University Professor Emeritus William Romoser’s research shows that we already have the evidence, courtesy of photographs from various Mars rovers.

Images above and below – Credit Dr. Romoser via Phys.org.

According to Phys.org,news Dr. Romoser, who specializes in arbovirology and general/medical entomology, has spent several years studying photographs from the red planet that are available on the Internet. He found numerous examples of insect-like forms, structured similarly to bees, as well as reptile-like forms, both as fossils and living creatures. He presented his findings Tuesday, Nov. 19, at the national meeting of the Entomological Society of America in St. Louis, Missouri. 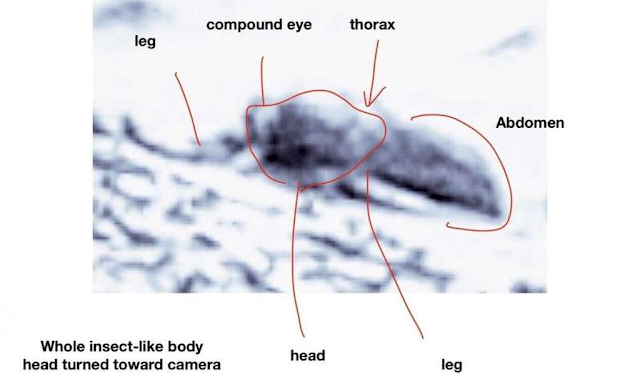 “There is apparent diversity among the Martian insect-like fauna which display many features similar to Terran insects that are interpreted as advanced groups—for example, the presence of wings, wing flexion, agile gliding/flight, and variously structured leg elements.”

Romoser said that there are a number of photos which clearly depict the insect- and reptile-like forms. 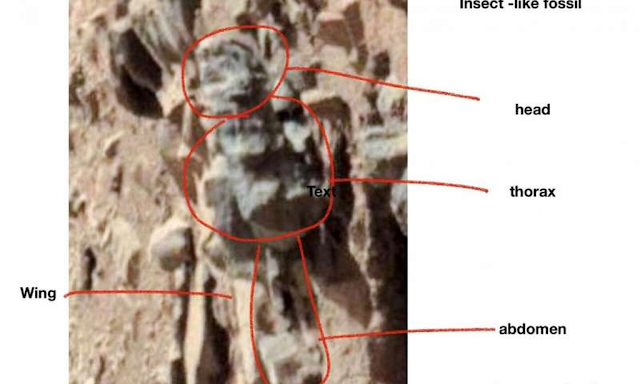 Numerous photos show images where arthropod body segments, along with legs, antennae and wings, can be picked out from the surrounding area, and one even appears to show one of the insects in a steep dive before pulling up just before hitting the ground.

Romoser noted that interpretations of insect- and reptile-like creatures he described may change in the future as knowledge of life on Mars evolves, but that the sheer volume of evidence is compelling.